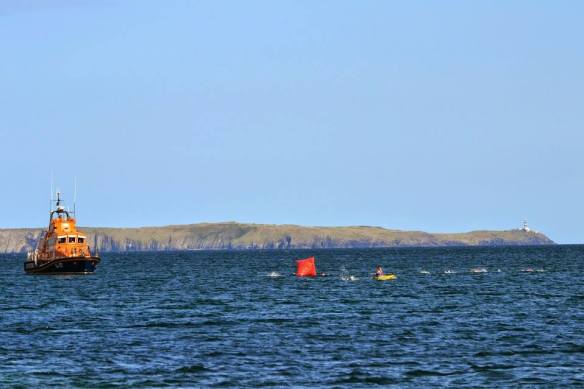 All proceeds from the swim go to the Courtmacsherry Lifeboat and Swim Ireland membership is not required.

Registration this year is via Active and closes on Thursday, July 23rd.

With thanks to Michael Holland, University Curator in UCC and the fantastic Irish Examiner Archives, here are some more pictures and cuttings about the swimming club at Weaver’s Point / Graball from the 1930s to the 1950s.  Our predecessors!

First a report on the club gala in 1935.  I’d love to know what the distance was for the long-distance race mentioned.  Also, was the man on the left the winner of the wetsuit category?

Picture from the 1937 gala below – it’s a bit blurry, but look at the crowds!

No picture from the 1947 “At Home”, but a report below.  I’d love to know what the “amusing novelty event” referred to was.

In an advertisement from 1939, it’s interesting to see that a well-developed social scene was in place in the club.  Maybe we should resurrect this one!  Bernard could drive the late bus for us.

Thanks again to Michael Holland.  We have located some other larger pictures and are looking to get them scanned.  I’ll post them when we have them.

Ould fellas will get beaten by young fellas eventually.  That’s what came into my head the other day looking at some photos.  A few examples – two from the same families, one not.

Some of you may remember a great local swimmer (really local – actually lives in Myrtleville), Sham Riordan.  It’s so long since he’s been seen in the water, it’s only the old-timers will be able to put a face to the name (Note: effort to shame him into coming back).  He turned up recently for look at where he used to swim (it’s at the bottom of the hill where he lives) and brought one of the reasons for his absence with him.

Former swimmer, Sham Riordan, pays a visit to the beach for Breda’s birthday swim. Just to watch, though.   It was tiring – especially for James Riordan.

The picture made me think that in about ten years or so, James will be ripping past the likes of me out to the Dutchman, cruising at 1.30 / 100m and not even drawing breath. Of course, I’m a slow ould fella as it is.  Sham might still be ahead of him for a year or two – he’s fast, is Sham – but time is very much on James’ side.

That’s what happens, though.  Keep feeding them and they’ll leave you behind in the water. Or the bike & road, as J. Slowey Jnr. is showing Snr. the way these days. 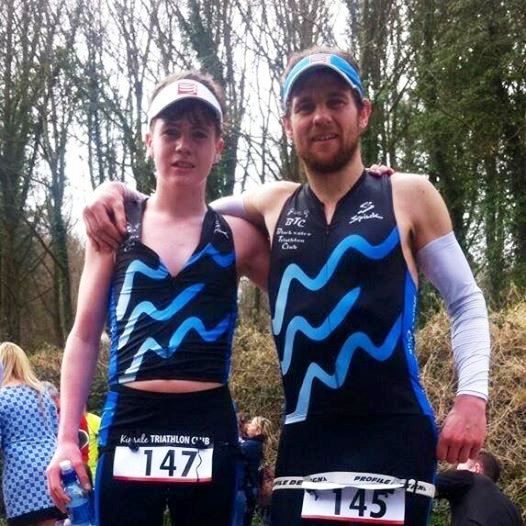 The picture that made me start thinking about young fellas passing out ould fellas, though, was the one below.  And not necessarily their ould fellas either – ould fellas in general. Even really fast ould fellas.

Taken at the Lee Swim in 2008, this picture features a former captain of the Barr’s U14 Féile hurling team and a treble winner of the Myrtleville – Church Bay swim.

Ned Denison is in the picture too.  Ned has yet to win the premier event in the Irish OWS calendar – the Church Bay swim, of course – and he can’t hurl (no touch).

There was a bit of a discussion about swim hat colours at the beach lately, as the number of swimmers back in the sea grows quite quickly.  Not a fashion discussion – a safety one.  As the Summer season begins, it’s good to think about safety again.

A quick scan of safety rules for open water swims online came up with these:

I stopped after five events – I reckoned it was clear enough.  I couldn’t find any that said “cool, black or dark, invisibility-inducing caps must be worn“.  I looked – really.

This, for example, is a high visibility swim cap:

Here’s one that isn’t high visibility:

It’s cool, black, low-profile  – AND BLOODY USELESS IN THE SEA UNLESS YOU WANT TO PLAY SUBMARINES!

So, jokes aside, black is great in the pool.  Totes the coolest. For the sea – go bright. As bright as you like.

Absolutely worthwhile to re-read this from Tom McCarthy, as the boats start to reappear around Myrtleville as well: Stay Safe.  Swim Safe.

It was only a matter of time.  With Eddie missing for months and Jumpin’ J skipping rehearsals for jaunts to Ballinspittle and Spain (equally lovely destinations, of course) there was clearly a gap to be exploited.  As Denis says, leave it to the mnás.

With careful planning and protestations that they just happened to be buying new togs, Carol and Breda got ready with the moves.  On Monday night – Voila, The Seaweed Shuffle.  Serious candidates for the new Myrtleville troupe – costumes and all.

I believe it was inspired also by Aisling Barry’s new wave (get it?) Harlem Shuffle solo at the weekend.  I think Marie was supposed to make it a duo but got caught by a warm one. 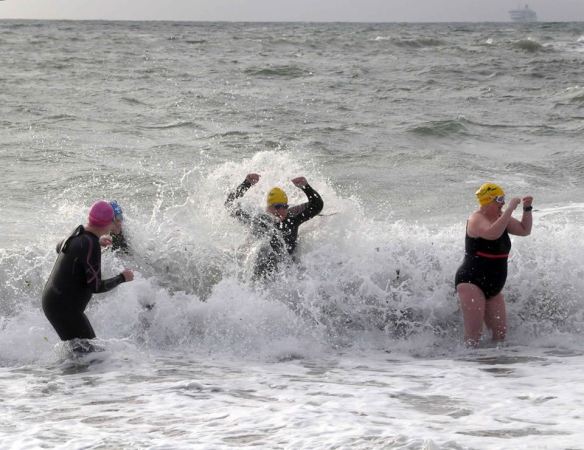 As Mr. Finbarr says – it’s all happening in Myrtleville.

As previously posted, an evening seminar on nutrition was discussed for the swimmers in Myrtleville.  Certainly, nutrition does seem to be high on the Myrtlevillian agenda.  Rather than a big long seminar, I thought we might just focus on one thing – the golden nutrition period of 45 minutes post-swim, AKA the muscle recovery window.

As the saying goes – here’s the science bit: this is the time when muscles are restored, repaired and regenerated.  All of the processes that help repair damaged muscle tissue, build new muscle and replenish muscle energy are activated immediately after exercise.  It is almost as if a switch was turned on.  However, this switch has a timer.  After 45 minutes it automatically turns off.  We call this 45 minute interval the “muscle recovery window.”  To take full advantage, all you have to is consume the right combination of nutrients within 45 minutes after a workout.

That all sounds fair enough, doesn’t it?  I don’t think there’s a problem with getting our elite swimmers to consume nutrients in the 45 minute window, so let’s just focus on six words there – “consume the right combination of nutrients”.

Back to the drawing board for the nutrition plan – or the frying pan and oven, maybe.

I personally didn’t get into swimming because I wanted to do loads of laps or distances in the sea.  It’s ended up that way a bit, but I do try to remember the reason I started sea swimming was  I absolutely loved splashing in waves at a beach whenever I got the chance. Hours, I’d be in there.  Saturday morning was a reminder of that.  Not much swimming, but a great start to the day.

Lots of people went in and watched out for each other.   Of course, it didn’t look too enticing at first.

James Slowey was first in and dispensing advice on his way out.  “I wouldn’t go in there if I was you”, was the advice.  The beard was weighing him down.

You did need to have a bit of focus to get in – gaps in the waves were in short supply. 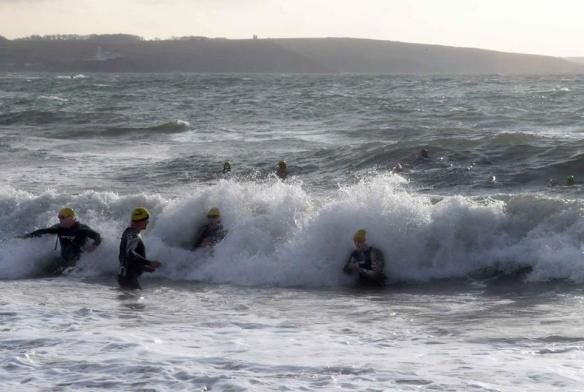 Warm, fluffy waves to snuggle into in Myrtleville. Toasty, like.

Swim tonight at 6.00.  Forecast is still a little Easterly but much lighter than the weekend, so hopefully some swimming will be possible.  We can’t go playing all the time!

Myrtleville is a busy place for swimmers.  Some days – even weekdays – there are shifts of swimmers going in all day.  For newcomers, this post is an attempt to put some structure on when there are swims they can join.

We will not be publishing swim times weekly or monthly on this site.  This is the information for year-round swimming. See below for where you can see more regularly updated swim times.

1. Don’t swim alone but if you’ve got another swimmer or swimmers with you and are aware of the tides and weather, just pick your own time: enjoy and be careful.

There are two set swim times for the Summer and one for Winter.  If in doubt about when people will be swimming, these are the best bet, weather permitting:

We’re a friendly bunch – come down and say hello, work out who you’ll swim with and get in!

To find out when other swims are going ahead during the week, you need to do one – or a few – of the following:

Your best plan is to get down on Monday or Saturday and ask around for who’s swimming when.  For instance, Denis Condon and a varying crew swim almost every day at 10.00am.  There are regularly 06.30 swims and so on….

4. If you’re new to sea swimming, read this.

5. If you’re new to Myrtleville swimming (and even if you’re not!), read this.

Once more, with feeling: DON’T SWIM ALONE.  You’ve got lots of ways to find someone to swim with listed above.  Please use them.

Swim at your own risk.

Yes, the stampede back to the sea continues.  Not suprising when we’re up into double figures in the water and it’s as calm as this – 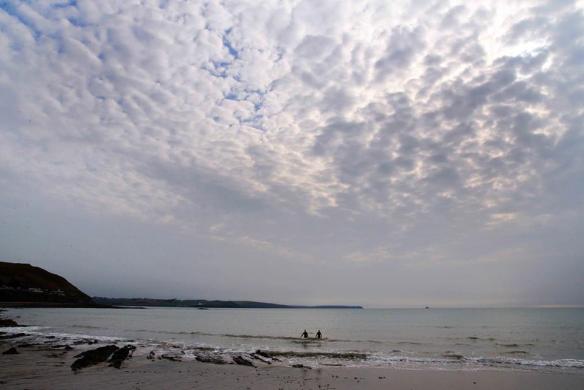 Maria O’Regan has been missing for a bit and needed sibling support.

Claire, Maria and Bernie O’Regan after a long absence!

Yes, it’s great to see old friends back around Myrtleville. 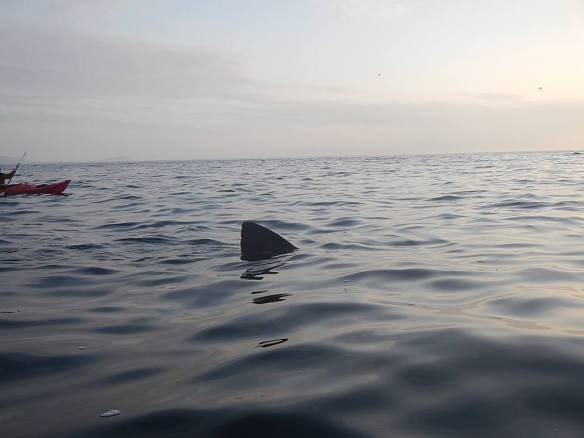 Just out from Fennell’s Bay?

I don’t know if this is going to be a monthly report and I hope Siobhan Russell is getting some cash for it!  Great spread of pictures.  Well done, Siobhan 🙂

Be sure to buy it to support the local paper. 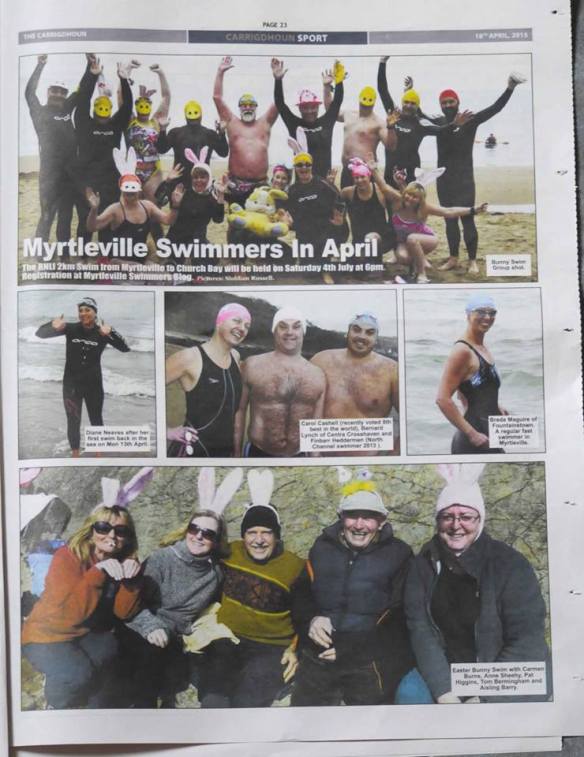 Doesn’t Finbarr look so happy since he became a Myrtlevillian?  And Breda – she’ll be getting phone calls from all the swim outlets to be their togs model for the new suit. Tom and Pat were on the beach on their own for years – they look like happy bunnies now with the company. We’ll be swamped with new swimmers.  “The place to be.”, F. Hedderman (Quote edited to delete expletives).