It’s easily known Denis is back.  Moaning on Facebook has recommenced – bigly, as someone once said.  Today’s moan, for those sensibly avoiding Facebook, was about getting bitten by sea lice.

Thankfully, Deirdre Dwane put him back in his box by posting the following useful piece of information:

In future, Mr. Condon, we’d appreciate if there could be a bit more accuracy in your moans and less speculative, uninformed conjecture.

Here’s a bit more information, since you didn’t bother to conduct extensive research (Open Google, type question, finish research) like some of us did:

‘Sea lice’ that cause ‘itchy bites’ are tiny little jellyfish or stinger larvae that have the same stinging cells (nematocysts) as an adult jellyfish/stinger, but because they’re only small they only affect a small area.

Future commentary on this phenomenon will be expected to be precise and along the lines of:

“Ah for feck sake, I’m bitten raw by some planktonic larval stages of certain jellyfish”, or

“Christ, the itching from cnidarian larvae is brutal today”.

Or even, “Are you all scratchy from a dose of the nematocysts tonight, Anne?”

Get it right, Denis, FFS.

There was a time when Siobhan Russell would have gone to the opening of an envelope to see her hero, Steve Redmond.  Nowadays, she’s so caught up in the whirl of her hectic celebrity-snapper’s lifestyle that a 6.30AM swim in Myrtleville was too much hassle.  She was hardly in the door from the Robert’s Cove Hill Climb bikers after-party at that time 🙂

Meanwhile down at the beach, poor Steve suffered on. Despite being jilted at the slip, he couldn’t hide his delight at being in Myrtleville for a dip in the warm (really, really warm this morning – even Denis won’t have to lie) and velvety smooth sea.

Steve Redmond in Myrtleville for a dip this morning.

He might have missed Siobhan, but Steve was delighted to meet our own hard-core men, Pat and Tom.

Meet the stars – Steve Redmond gets to have his photo taken with Pat Higgins and Tom Bermingham. “Better than any Oceans Seven”, said Steve 🙂

Come back soon, Steve.  We’ll try to fit you into Siobhan’s diary.

It seems like years since our spiritual leader was amongst his throng on the beach.   A timely reminder of his vaunted good looks seems necessary.

Phwoar, I hear the ladies say. Swoon!  When will we see him again, they wail??

But wait!!  Stepping into the breach of Denismissingitis evident around Myrtleville, a local entrepreneur has created what is sure to become the must-have toy for all Myrtlevillian households this Christmas, The Woolly Denis Doll.

Woolly Denis Doll – gotta get one!

Mairéad Ní Mhaoileóin has ramped up production of the dolls to coincide with the ever-closer return of our hero. 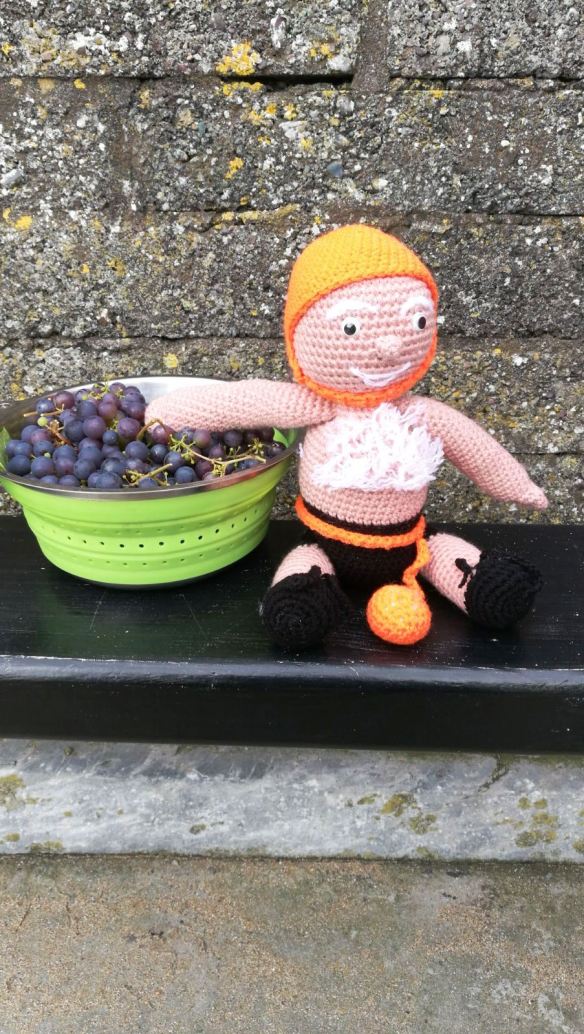 Denis Doll Action Shot – on location at the bench by the beach.

What more could the Myrtlevillian ladies (AKA De Mnás) and jealous guys (for sticking pins into) want for Christmas?  Get your orders in now to MNM Knitters Worldwide, c/o Myrtleville Beach.

It’s fantastic to see new swims being completed in Cork Harbour.  There are lots of options here at home, without travel costs 🙂

Another bright Saturday morning (12 Aug) found Gary Frost, Ger Venner and Maeve O’Connor sneaking up the Ballinacurra River a little before HW.  Having had the taste of distance swimming in the harbour a few weeks back around Spike, a plan had been hatched. 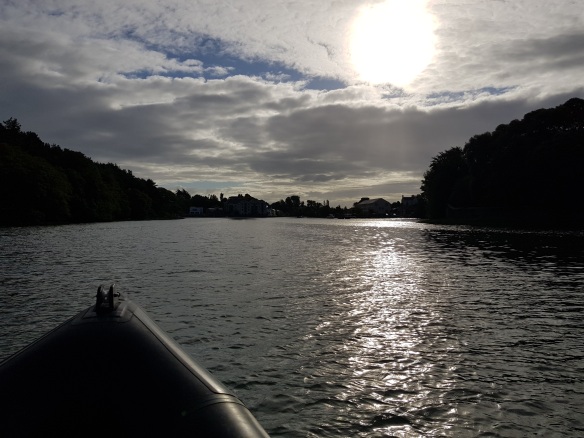 To keep mileage up in between, Maeve and Ger were joined by Shane Gannon and Breda Maguire (in togs) for a jaunt from Myrtleville to Roberts’ Cove the previous Friday.  A lovely evening swim and well done to Breda especially, who had swum that route three years previously in a wetsuit.

Anyway, back to East Cork, where at 0847 the three swimmers slid into the quiet backwater (within sight of the N25) and headed off. The route was incredibly scenic, with wooded hills, gold and green fields, old stone walls and the odd rotting hulk (but enough about Gary).

2k brought the team to the entrance to the Ballinacurra River, across from Rathcoursey, once a thriving fishing village with its own design of hooker.  Some wrecks of these still show at low water.

A quick feed stop, recheck bearings and off towards Marlogue and East Ferry.  The WNW breeze, having almost a 7k fetch across the back of Great Island and meeting the falling tide created tough conditions. This lasted for about a kilometre until the shelter of Marlogue Woods created glassy calm conditions.

Another quick feed, then down past Murph’s Pub, East Ferry Marina where the shadowy lines of Thunderchild were just visible in the rainshower, and past the amazingly picturesque Holy Trinity Church nestled in the woods.

The falling tide made that a very quick 2.5k to Marlogue Point, right across from Aghada (where there was an Airship station in WWI). Just over half the distance done, but not yet half the swimming.
At the entrance to East Ferry, the swimmers took a hard right turn and sighted the spire on Cobh Cathedral all the way.  They were joined by a very light grey seal briefly  after the turn, who then found more interesting things to do, much to their relief.

Passing the tall stack of the power station to the South, the trio stayed close to shore trying to avoid that Westerly chop which again had built (over tide) along the northern shore.  However, that eased the further they swam and passing Gleann Mór conditions became benign again.
The temptation to hug the shore into Cuskinny Bay was to be avoided, as it would have added almost 1k to the trip. Almost straight across, with a little right in the direction to pick up an ebb push along the shores from Cuskinny House along the steep-to wooded shores. Any further out to sea and an unswimmable ebb in the main channel would have put paid to the trip.
The team landed under the wall of Cove Fort, built in 1743 and now home to Port Operations and the Titanic Memorial Garden. The distance measures 10k on the maps, but the swimmers covered 12k on the day in 4 hours and 3 minutes. Water temp was between 14.5 and 16 degrees for the duration. Yours truly was pilot and largely just drank lots of coffee!

The usual cries of “never again”, “I’m only doing 5k from now” and the like soon faded later that evening as the little whatsapp group started having notions once more…
Whatever else is next, we live in an amazing harbour in the midst of an amazing coastline, with so many scenic swims that are unparalleled in beauty – go swim them.