Ned Denison shared his thoughts on safety on Facebook and email.  Re-posted here as food for thought for all open water swimmers:

So – the topic of “safety” in our local waters seems to have come up again.
I have to confess I don’t like the word. It is a terrible way to judge open water swimming.

For me, it is all about “relative safety” and “sense” – which only an individual can judge depending on their open water experience, water speed/power and consequences.

Pool swimming, with a lifeguard on duty, is relatively safer than open water swimming.

Getting into the water at Myrtleville in crashing waves is relatively safer than getting into Sandycove with waves crashing on the slipway.

Swimming at Myrtleville (with the exception of right around the Dutchman Rocks) is relatively safer than swimming around the back of Sandycove Island.

Swimming in a well fitted wetsuit (made for swimming not surfing!) and with a red float attached is relatively safer than swimming in togs.

Swimming in 15 C water is relatively safer than 10 C.

Swimming in 10 C water is relatively safer than swimming an ice mile in sub 5 C.

Open water swimming is relatively safer than using a mobile phone (even with headset/speaker) while driving. So, I would advise anyone talking about safety to start with their car activities.

I would submit that the above statements are simply correct and can’t imagine anyone questioning them.

Please take a close look at YOUR open water experiences – they can help YOU better evaluate YOUR relative safety. One way is to look at the Cork Long Swim List….if you have a couple of recent entries than you probably were swimming for at least 90 minutes doing a 5k or more. It is an experience that will help you reduce your chances of panic in the water.

If you have gone around Sandycove Island 200 times, in different conditions and year round…..then unless you are alone, very unwell, drunk or the conditions are the worst you have even seen – then your next lap will probably meet your definition of relatively safe.

I am NOT comfortable out near the Dutchman Rocks – I don’t know them well enough and probably never will – so I try to keep well clear. I am pretty comfortable in the gap at corner 1 of Sandycove Island – I know it pretty well. I suspect Bernard Lynch would have the opposite feelings!

How fast are you? Normally it doesn’t matter – BUT can you beat the mid-tide current around the back of Sandycove Island? OK – so you only swim at the published swim times which are around high tide – not a bad move!

Is this a bit mean of me? Remember the 2 k race a few years ago – Myrtleville to Church Bay, when lots needed to be rescued when the tide was winning? And on one of my nearly 1,300 laps of Sandycove Island – I went backwards at the house that used to be red. Trust me…there are tides and currents SO STRONG that nobody can beat them. Speed can beat some current, some weather and some low temperatures….the more experience you have the better YOU can judge your relatively safety in the next swim.

How much power do you have in the open water? Could you drag in your swimming partner 500 m if needed? Most interestingly – could they drag you in? When was the last time you tucked your goggles in your togs and swam back 500 m? If you haven’t done so recently….please do. It is a bit like getting a 17 year old to change the tyre on the car…..some day they may NEED to know. I think you need speed and power to beat some chop and some big waves. And – trust me there is a 10 fold difference between a 30 minutes swim in nasty conditions – compared to a 60 minute swim – so YOU need to judge YOUR time in.

Consequences……I am 58 with no kids. I would expect a parent of kids below 10 years of age to have a different individual measure.

I have seen two GREAT swimmers make a hash of their first lap of Sandycove Island…I was there. One turned right at corner 1 and I chased them down…eventually. The other missed the turn at Corner 2 – nobody was near them. Then it got dark….they had swum into Kinsale Harbour and then came back…somehow.

Be cautious your first time….in a new place or new conditions. I am a fan of PUSHING your personal bests: longest distance, longest time in the water, lowest temperature and roughest conditions. UNDERSTAND that you are pushing it – take extra precautions and once you have done – your base of experiences deepens and you WILL BE RELATIVELY SAFER in the future.

You don’t have to be in Australia for Christmas on the beach.  With our fame spreading worldwide – even to the Gaeltacht – TG4 arrived on Christmas Eve.  Someone asked me “They just turned up?  How did they know there would be people there swimming?”.  I said, “There are always people swimming in Myrtleville 🙂 “.

With the afterglow of further fame, it was on to Christmas Day and the usual completely understated Myrtlevillian approach to any occasion. 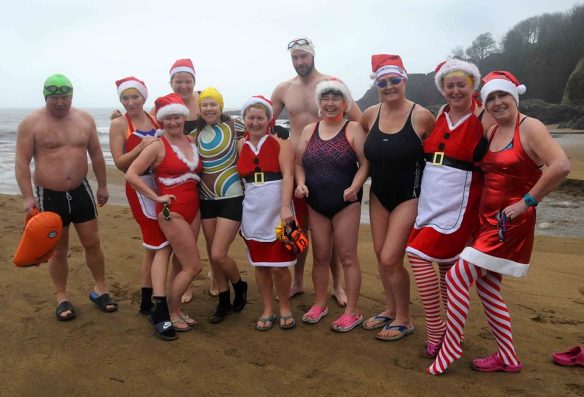 Christmas crackers – and the guy on the left, who just looks crackers. Smile, Denis – Smile!

Every artist needs a muse and Siobhan Russell has found hers in Joanne Horgan. Topping the Vampire Swim witch picture, here’s the strongest contender for the calendar cover. 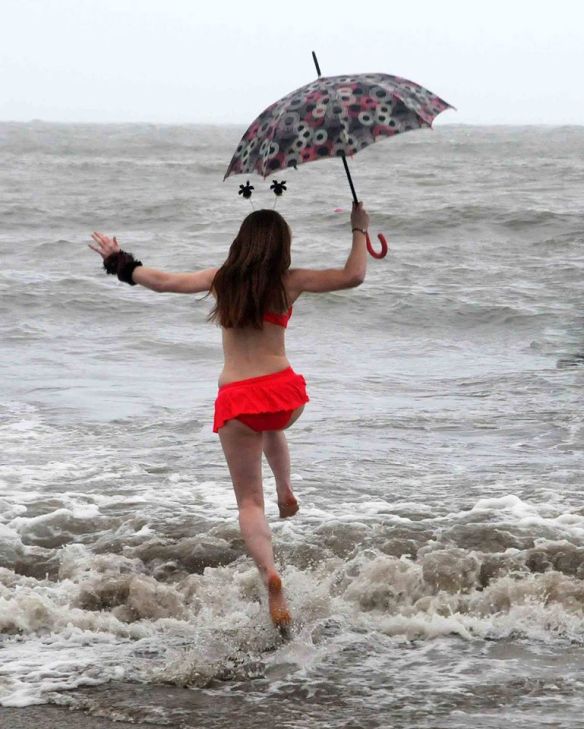 What do you wear to go swimming in the rain on Christmas Day?  Red, of course – and a brolly.

A lucky RTE camera crew was granted access to Myrtleville this morning 😉  Watch out for familiar faces – as Gaeilge, even – on RTE news at 5.40pm and TG4 at 7.00pm this Christmas Eve.

Stuck for a present for the swimmer in your life?  Our Santa sack of gifts (kindly held for us in Centra Crosshaven) contains gift options for all –

Myrtleville Swimmers T-Shirts (€10) – OK, not all sizes but still a choice: 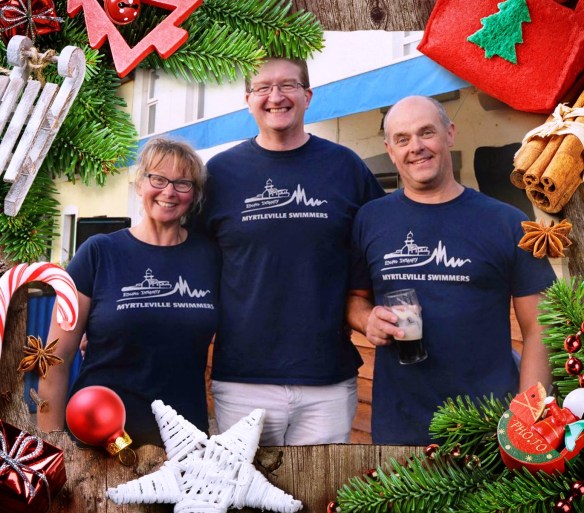 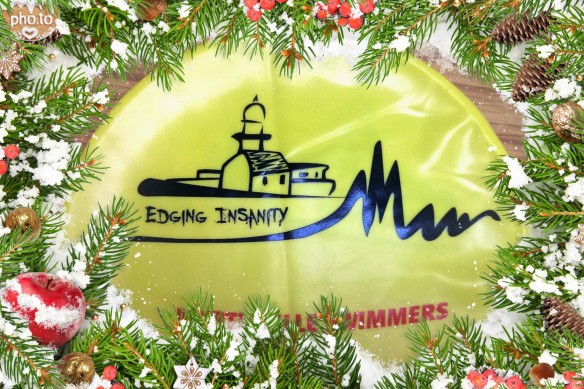 Only 7 calendars left.  Don’t miss our own Miss May, Breda Maguire: 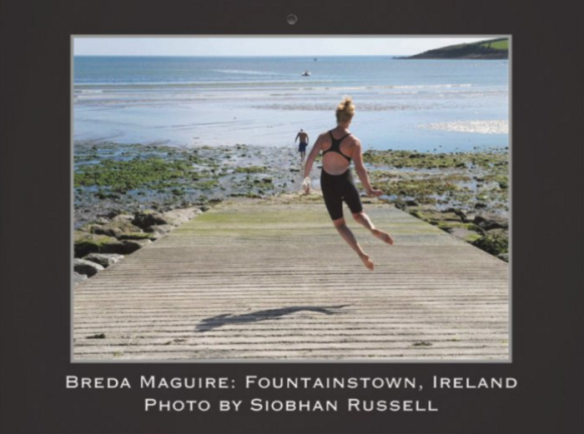 The hard work of Tom Bermingham and Pat Higgins – along with Jimmy Long’s generosity in providing permission for the new awning and bench in Myrtleville – were marked today with a grand opening, Myrtleville-style! 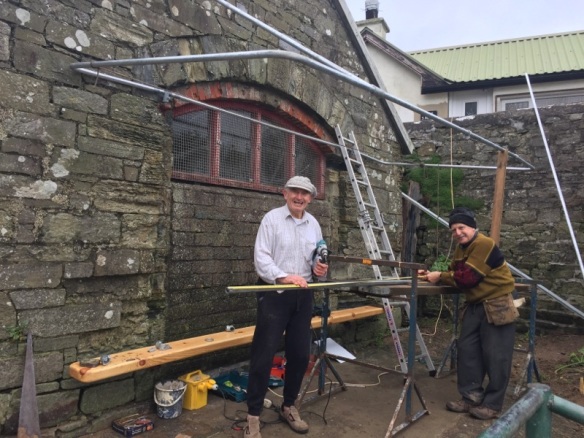 Men at Work – hard labour for Tom and Pat: but always with a smile on their faces.

The Long family own the boathouse and Jimmy Long very kindly gave permission for the structure.  He was on hand to cut the ribbon, aided by elves! 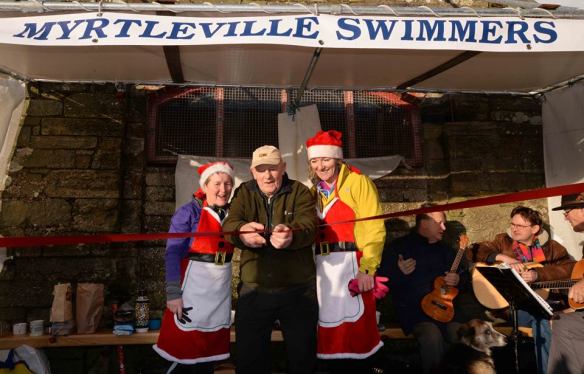 When you only meet people in the water it’s hard to judge their talents in other areas, but we certainly have some talented musicians in our midst, who entertained us all this morning.  Maybe the band really should be reforming!! 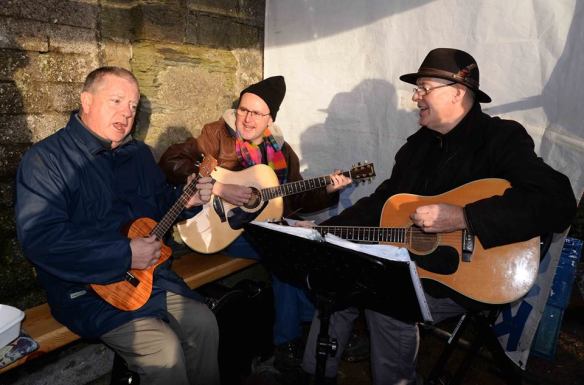 Jimmy Long and Tom Bermingham gave great short speeches on what swimming in Myrtleville means to them and timely reminders about always swimming safely, no matter how experienced you are.  Jimmy was presented with a “thank-you” Christmas hamper for his generosity, including this cake for himself and his wife, Noreen. 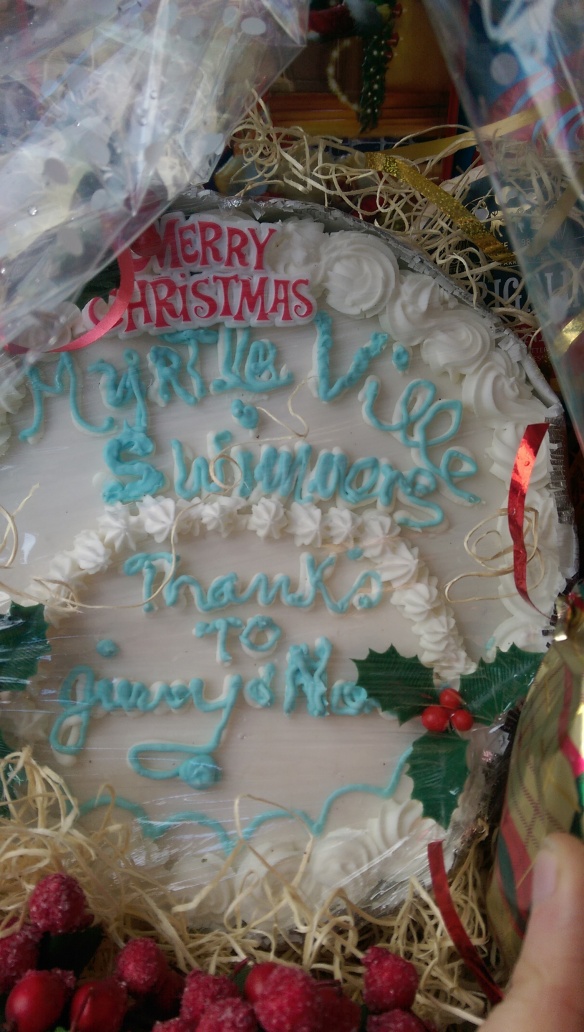 There were others who helped out with the project as well, including Gary Frost providing his own sail for the covering! 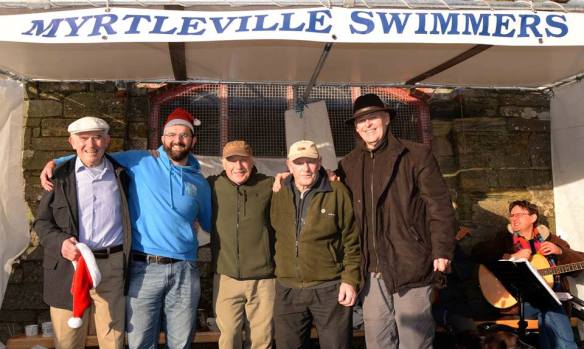 It was a really enjoyable event this morning and a great start to the Christmas break.  Very well done to everyone involved. 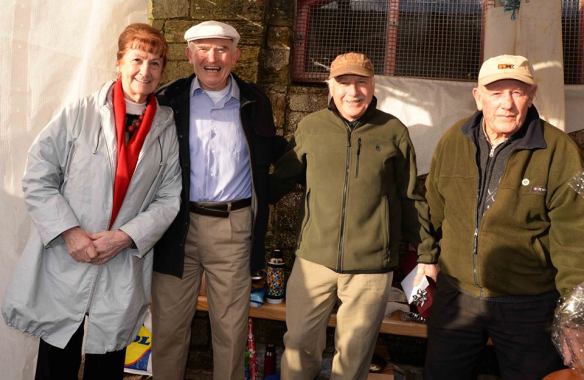 Tom Bermingham and Pat Higgins have been swimming daily in Myrtleville for many years – rain, hail or shine (mostly rain and hail!).  Many of you will know them and have enjoyed Tom’s encouragement that the sea is “like a bath” (even in February!).

As efforts to get planning permission for a changing shelter have been dragged out, Tom and Pat have made a huge effort into installing a bench and awning to offer protection for swimmers changing.  To mark this, we’re going to have an unveiling on Sunday morning next at 10am.

Local resident and longest serving Myrtleville swimmer, Jimmy Long, will be there for the launch and it’s important that as many of us as possible attend.  Whether you have time to swim or not, come down on Sunday at 10am and mark the event.  We will all be very glad of the shelter in the months ahead. 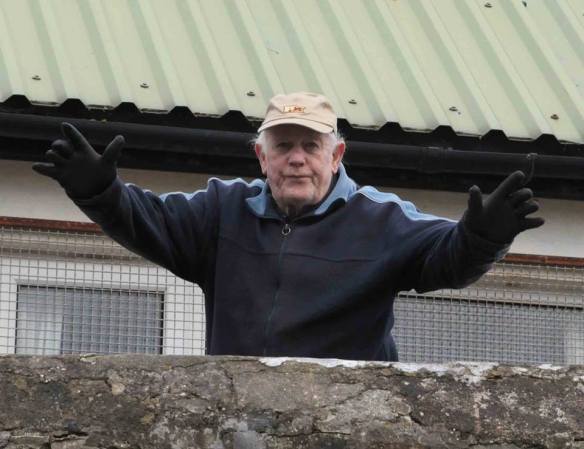 Jimmy Long in 2014 – bestowing his blessing for another year on the beach! 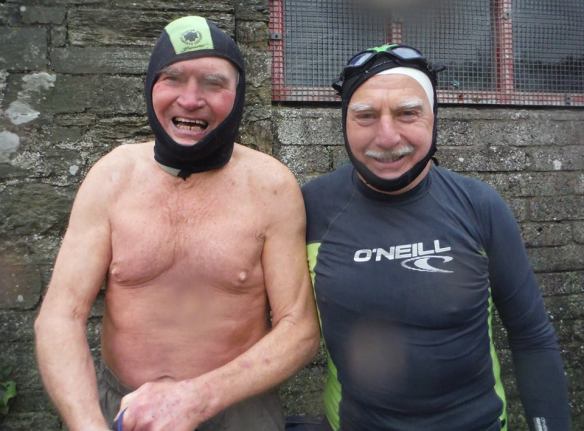 Tom and Pat – in the sea every day and it’s always warm (they say)!

Siobhan Russell’s latest batch of photos are B&W. She needed to have some atmosphericy type carry-on for the photo-shoot for the lads in the band making their comeback.  I personally think they’ve aged well and the shorter hair suits them.  I also think taking the pic on the beach rather than up by the boathouse like they did in ’76 was inspired.  Nice one, Siobhan. 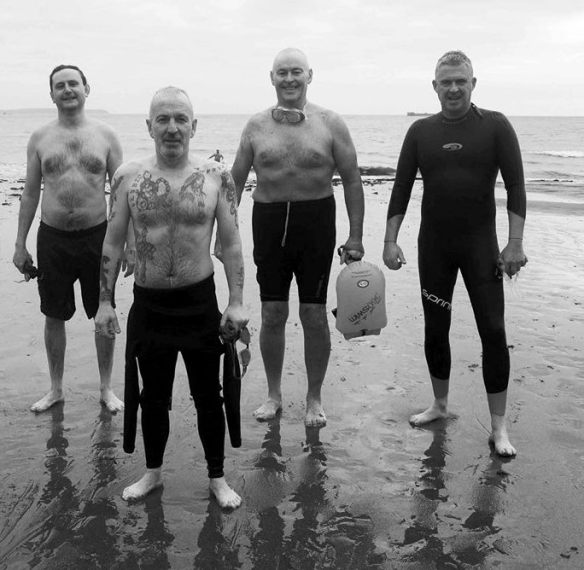 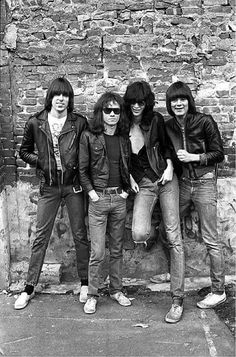 Some debate also last week about the comments regarding Eoin Lowry’s potentially drugged status on this site.  Look, the facts are there for anyone to see – 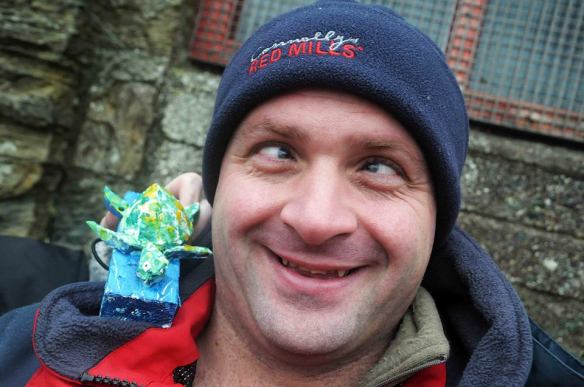 There’s something going on with that fella.  He hasn’t been seen around for a while either. We’ll have to await developments on that Myrtle and Patso story.

The new bench looks great, although some people hog the whole thing for themselves.  Typical. 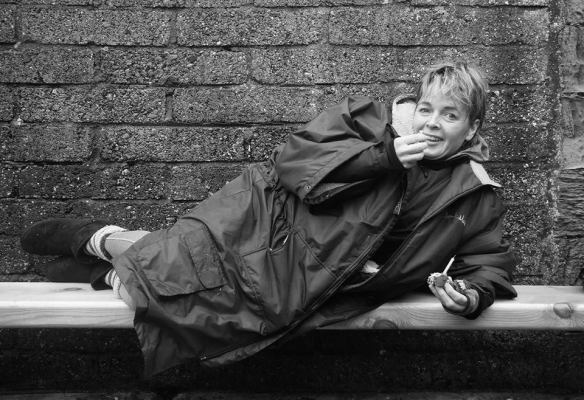 Lots going on with dozens of people having realised that the OW season runs from Jan 1st to Dec 31st.  Swimmers in every day, morning and afternoon.

The Myrtle Turtles appear to have resolved all issues and recent press releases emphasise the sweetness and light surrounding the team, as they toil away in chlorine and occasional saline.

There have been suggestions that the latest PR photo of Eoin Lowry back in the Myrtle fold might suggest he has been drugged, but Manager Mulcahy was quick to rubbish this suggestion.  All is going to plan, says Maeve.  What could possibly go wrong? 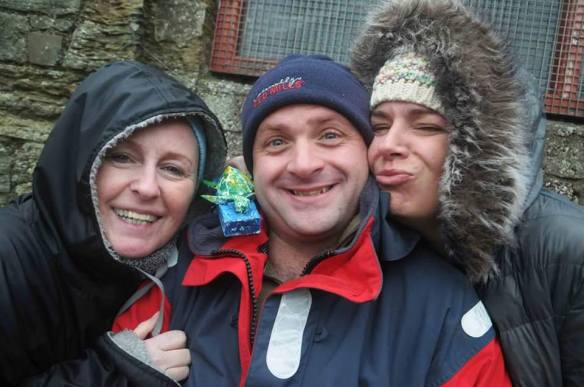 Anne, Ros and Myrtle keep a close hold on Eoin.

Elsewhere, The Hat returned to the USA for a bit of cold water swimming at 5c with Barry Madden in Chicago. 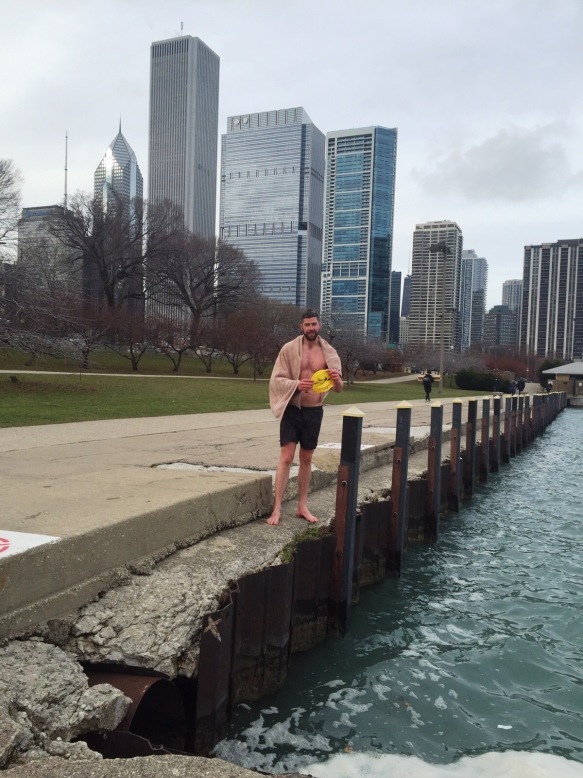 Barry Madden and The Hat after a swim in Lake Michigan. 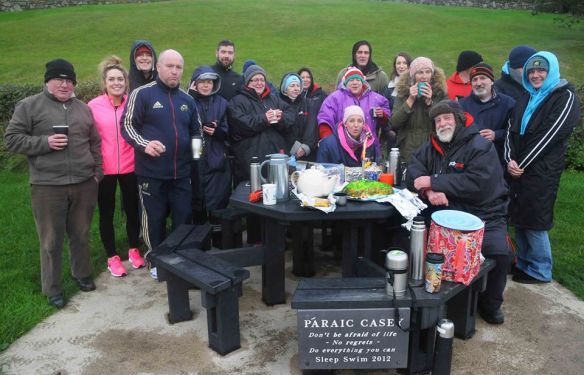 A nice bunch of Myrtleville and Sandycove Swimmers helping Mike to celebrate his 70th at the Turkey Swim last weekend.

It’s rare indeed that anything on this site can hold a candle to the weighty, erudite pronouncements of the Bible of Open Water Swimmers – Loneswimmer.com.  Today, however, we are of one mind, on the one page – twins, like.

Today’s Loneswimmering pronouncements from the mountaintops (or sea-caves, or somewhere biblical) concern the Surf Fur Parka and their Rebelish status .

Brother Donal of the Sea declaims that those who wear the Parka are blessed amongst swimmers and eons beyond the Bronze Age neanderthals in their Speedos and non-Parkas.

And behold, there came onto the beach at Myrtleville disciples of both creeds – which cult would you rather join on the 1st of December? 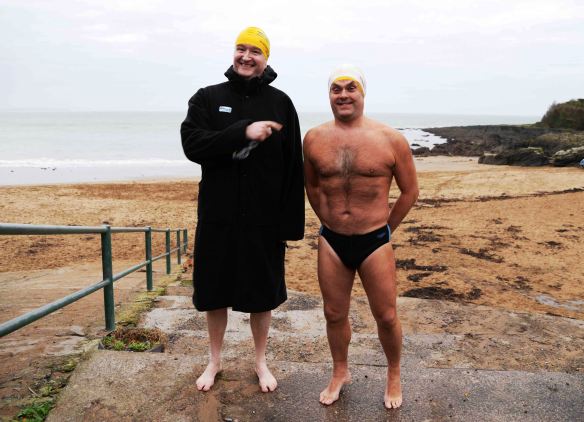 Brother Damo and Bronze Age Bernie – how cool is that Surf Fur? How cold is that guy in the Speedos?