I was impressed when Gary Frost held his 40th Birthday celebrations on the beach – part of them anyway.

However, that looks like a feeble commitment when compared to bringing your wife down to watch you swim at 8.15am on a Saturday morning, on the day of your 1st Anniversary.  Take a bow, Orlando Hill…..sorry we couldn’t get a better picture!

Damian O’Neill, James Slowey and The Anniversary Man, Orlando Hill on a frozen beach last weekend – where else would you be for a big occasion?

Great numbers for the swims last weekend, with fifty swimmers over the two days.  We had temperatures on land between -2c and 7c and in the water around 10.5c-11.2c, depending on whose watch you checked.  Whatever the temperature, it was beautiful.

Pictures from Siobhan Russell and Anne Sheehy.  I’m under time pressure, so I can’t name everyone as usual – plus, there are so many people in Myrtleville now, I don’t know all the names anymore!  Also, some of the guys are incognito with ‘taches. We’ll have to get the photographers to take names in future 🙂 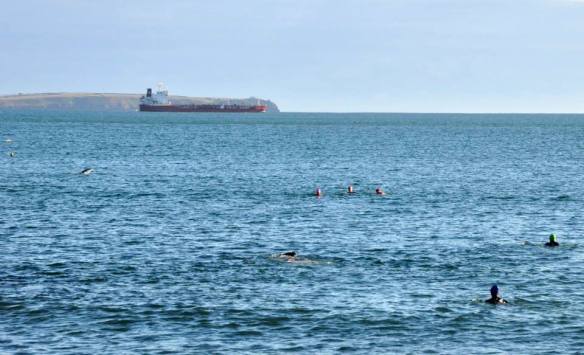 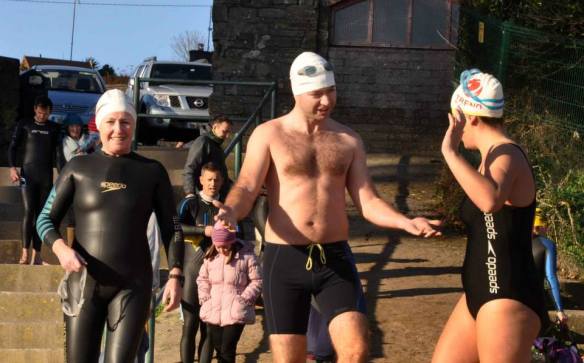 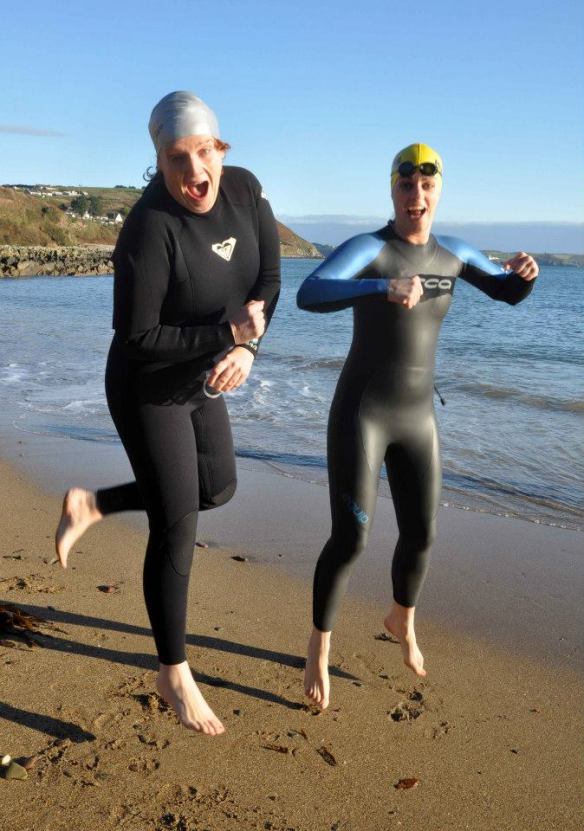 An Action Shot. Anne Sheehy had to get out of the way quickly after shot was taken. 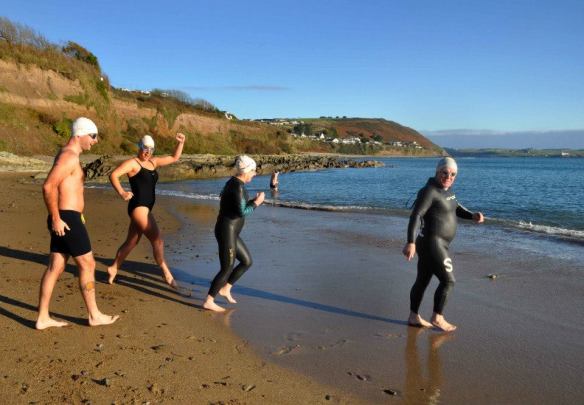 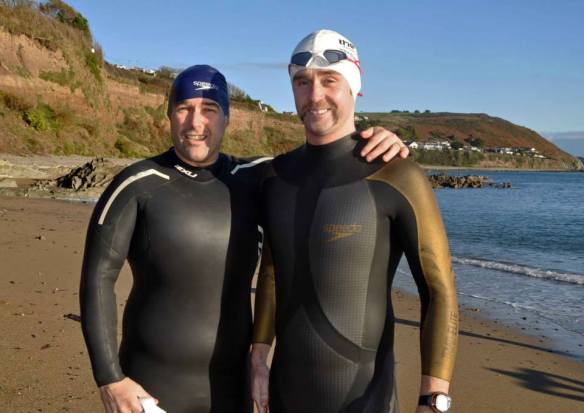 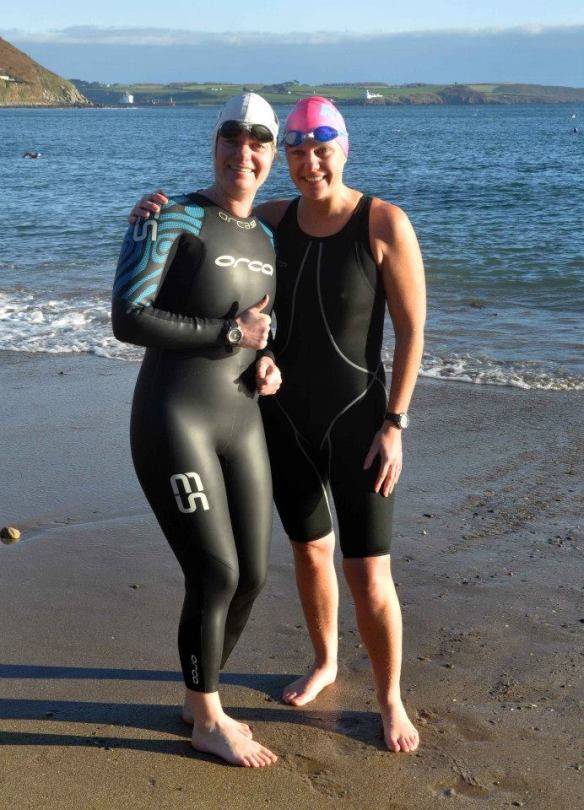 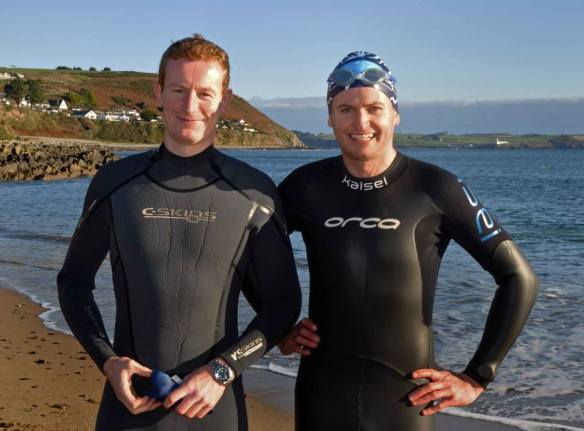 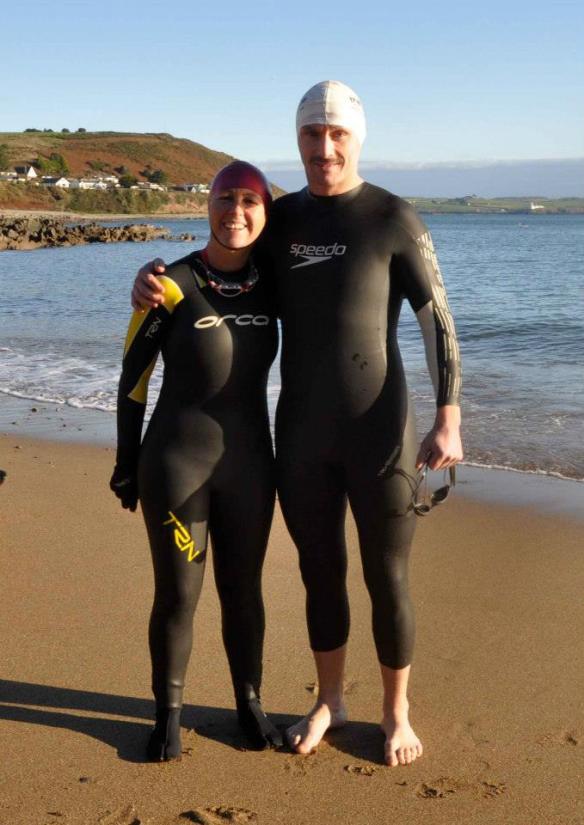 Bernard Lynch always maintained he’d know when Myrtleville became the acknowledged best swimming location – when Mike Harris came to swim there.  Bernard had a great day on Saturday when Mike arrived for the Turkey Swim….. 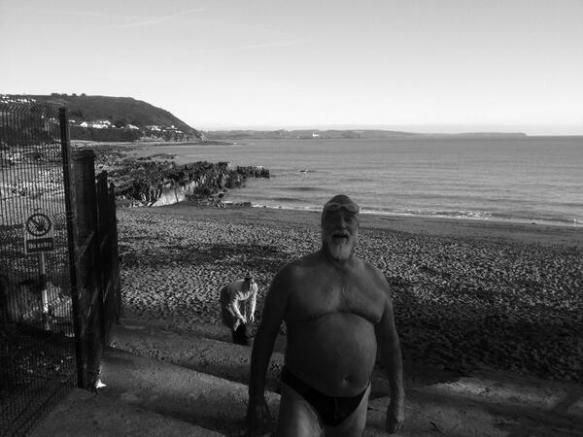 Mike Harris in Myrtleville – proudly snapped by B. Lynch.

Mike clearly also had a great day, because he came back on Sunday and brought Angela….

Angela & Mike Harris….(the forms are in the post, Angela – shhhh… 🙂

Two great swims in Myrtleville over the weekend – three, counting the 08.15 one on Saturday, which started with this…..

The 10.5c water was a relief after the cold on land!

Loads of pictures from Anne Sheehy and Siobhan Russell to post and I’ll get them up during the week.  Thanks to Carol for organising the swims this weekend.

Carol in charge of the cash!

To add to our equine member last weekend, Anne Sheehy sent me on a couple of pictures of one man and his dog.

Tom McCarthy kits out his dog for Winter swimming.

I also got this one, of one girl and her sister….

Anne Sheehy & her sister, Carmen Burns, making full use of scarce resources – they’re only small, so there’s plenty of room….

The series organiser, Carol Cashell, has scheduled three dates in Myrtleville this year for the annual Turkey Swims.  These are November 23, 24 and December 21.  Everyone is welcome and details are below.

The Swimmers Turkey Series is a Social Event for Cork OW swimming in the Winter. Remember to bring your Flasks for after the swims.  Nibbles are always welcome too! Have Fun and Enjoy 🙂 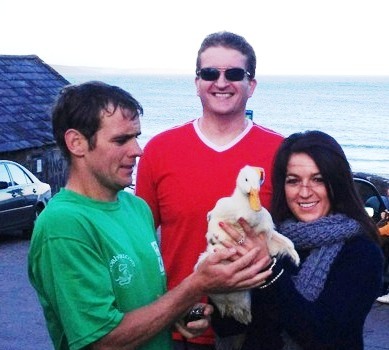 How the ‘Turkey Swims’  work:
** Swimmers Sign In and pay €2 on the  day of Swim. (someone will have a money box and sign-In  sheet).
** Money Collected goes towards Prizes drawn on 22nd  Dec at Sandycove. These include Butcher Vouchers (instead of an actual  Turkey) and many other spot prizes (wine / chocolates /  selection boxes etc!). We had over 20 prizes last year.
** Don’t Forget to Pay and Sign In, if you don’t you  are not in the draw!
** Make however many swims you can, 1 –  10.
** The more you swim, the more times you are entered  for the ‘draw’.
** A Swim will be defined as being in the water for  more than 10minutes!, Doesn’t have to be a full lap to the Dutchman.  Togs or  Wetsuit, up to you, swim safe, stay warm, swim with similar speed buddies.

Amazingly, we’re still up at 11.5c to 12c in the sea and the Winter is being kept at bay.  14 swimmers on Saturday morning and another good group today.  The sheer joy of swimming this late in the year is driving some people to spontaneous displays of happiness….

The Water Temperatures have Myrtleville Swimmers jumping for joy……………

Denis Condon was in six days this week – he’s an example for us all!

Siobhan’s new waterproof camera is getting trial outings – we’re expecting great things from that in the coming months.

Siobhan’s new camera – get ready for the view from the Water.

And finally, we’re always happy to share the beach with all-comers…..

Nobody said you had to be horses to swim through the Winter….

Once again – DON’T FORGET THE LOGO COMPETITION.  Get the artist in your life into action 🙂

Centra, Crosshaven and Diesel, North Main Street are sponsoring some of the costs of swimming caps for Myrtleville Swimmers.  However, we need a logo:

Sad swimming hat in need of a logo

We are running a competition, open to artists of all ages, to design a Myrtleville Swimmers logo for the new swimming caps.

The logo must include the words Myrtleville Swimmers.

We suggest it should incorporate some of the fantastic views around Myrtleville Beach – the Dutchman, Roches Point etc. – but that’s up to each individual artist.

All entries must be posted to Logo Competition, Centra, Crosshaven, Co. Cork.

Do not put your name on the logo entry.  Instead, each entry should have a covering page with the name, address, telephone number and email address for the entrant – and age, if you wish.  Each entry will be numbered when opened and the judging committee will see a number only – they will not know the name or any details of the entrant.

The winning logo will be used as the basis for a design to be printed on the new caps.

The winning artist will receive all the associated fame, as well as a Diesel Hoodie in their size and a bottle of champagne, courtesy of Centra, Crosshaven.

By popular demand and with thanks RMcK Poetry Productions (all rights reserved)…..

When Shivers asked me to speak
I thought I’d write a poem
So I hope you all remember Emily Dickinson from your Leaving Cert
Because her poems were a bit odd!

Caroline wasn’t sure when asked
She didn’t know how many of us
Someone called the Lifeboat for Bonnie
Excuse my French, twas Fucking Ridiculous!

Mrs V doesn’t like seals
Miss O’Connor used to be nervous
And as for Tara swimming in winter
May the Lord preserve us!

Our Ruth was the new girl
From yonder in Monkstown
If you need frothy milk on the beach
This lady won’t let you down!

The swims I do most often
Bryan calls the Friday Club
It’s all about the swimming I swear
And not about the River’s End grub!

Our poor children barely notice
But the teachers and other kids must
When Michelle, Mrs V, Siobhan and I
Do the Friday school run in wetsuits and Uggs!

Our Bryan’s often away
Off foreign in Afghanistan
Those O’Connells will really do anything
To ensure a winter tan!

Then there’s our other boys
Bendy, Tim, Harry, Landy, Buzz & Sean
Don’t know why I’m suddenly
Thinking of our Siobhan?

As some of us are Triathletes
We need to mention riding
And cycling too I suppose
Though we mustn’t tell Fiona how fast Sean cycles down that Strava hill!

Well maybe not for one girl
Who hurled her way through the run
Far too competitive you see
Sara, it’s supposed to be fun!

Gary arranged to swim at sunrise
He was so worried about 40’s tedium
What better way to swim when old
Than being held up by helium?

I know it was in Kerry
But it has to be brought up
“Beat the wives” Sean and Bendy called the team
Oh well lads, hard luck!

Thanks also to Joleen
Who sorted all the graphics
We had two Facebook events
Poor Venn was expecting traffic!

And finally the die-hards
Who definitely keep logs
And won’t be seen in wetsuits
Cos they’re total rides in togs!

Bernard, Damian and Carol swam 24k
Most can’t even run that far
Good thinking by Michelle
Who lashed on the lights in her car

So that’s the end of my little rhyme
And in case you’d forgotten about Miss Dickinson
Good night!

It was a great night in Bunny’s on Saturday, thanks to all of the organisers – Rosaleen, Siobhan, Joleen, Niamh etc.  We started the day with the normal 8.15 swim and had a good turnout of ten, with a second group of sixteen arriving at 9.30, I’m told.  Still busy on the beach.

Saturday November 9 – swim to get ready for the party.

I was delighted to see Tom and Pat there early in the evening – they said they had to head home for bedtime about 9.00 and also to be ready – as ever – to swim on Sunday morning 🙂 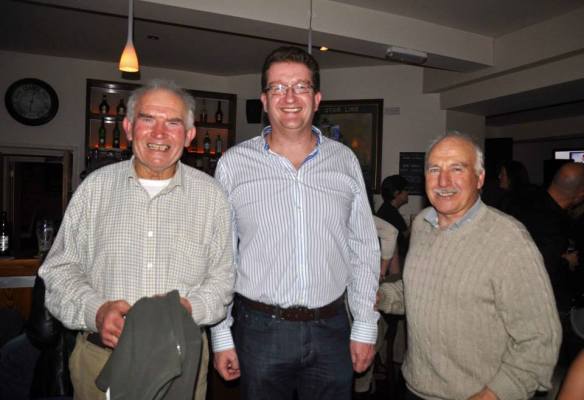 The real Myrtleville Swimmers – Tom Bermingham and Pat Higgins – with a young fella.

Rosaleen McKeown claimed that her poem was her first ever, but it was so good I’m sure she’s been scribbling away for years and years – it was hilarious. 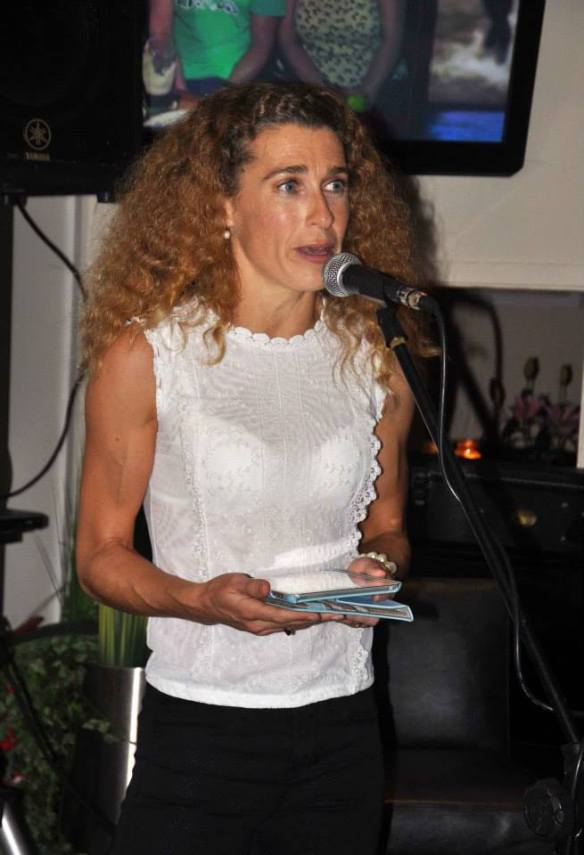 It was a night for training plans and alcohol bans to be put aside – and they were. 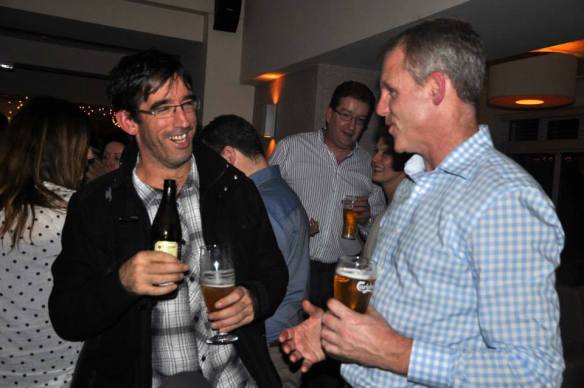 Sham Riordan gets a rare pass for a night out – with Vincent Harrington.

Loads more pictures on Siobhan Russell’s facebook page as always.  She got due recognition for all her wonderful work when the Crosshaven Friday swimmers presented her with an underwater camera.  A whole new range of options for next year!!

Running in the background all night was a fantastic video of lots of Siobhan’s pictures from the year.  What we couldn’t hear was the soundtrack Joleen Cronin had put to it – who knew there were so many songs about swimming??  Really great work by them both. It’s 22 minutes long, so get a coffee and relax.  It’s worth it!

Don’t forget to get entries in for the Logo Competition.

Siobhan Russell, Joleen Cronin, Rosaleen McKeown, Niamh O’Connor and loads of others (real sharing of the workload going on here) are organising an end of season celebration and party.

It’s not just for swimmers (since we’ll still be swimming all Winter and the season never ends!) and all are invited.

If possible, let them know on Facebook if you are going to attend, or just arrive on the night.  All welcome.