OK, we can all see he has made a complete balls of getting the buoys cleaned, but that’s no reason not to be nice to poor old Jim Shalloo.  Yes, he said he’d get the job done.  Yes, he spends more of his time showing videos on his phone and delaying swims than he does actually cleaning buoys.  But still, nobody wants to see him in tears.

Well, maybe Trevor does.  It’s easy to forget in the mists of time that Trevor Malone was the original Myrtlevillian solo Channel trailblazer.  Jim hasn’t forgotten, though, and he really looks up to Trevor.  So much so, that he takes Trevor’s “gentle banter” to heart. It might be fair comment that if Jim considers the buoys to be clean enough, you’d hate to see the state of his underpants.  But Trevor didn’t need to say it.  Jim took that one well, though.  The one that got him was when Trevor told him he was so useless, he couldn’t get a hat down in Sandycove.  That got him.

Why?  Well, as everyone knows, it’s simply impossible not to get a hat down in Sandycove.  Everyone gets a hat.  It’s like a kiddies birthday party. You can hardly step out of your car without Ned being across the road to present you with a hat.  Monday Hats, Tuesday Hats, Lappy Hats etc etc.  So Trevor’s statement that Jim wouldn’t get one – well, just look at the result (and the evil grin on Mr. Malone). 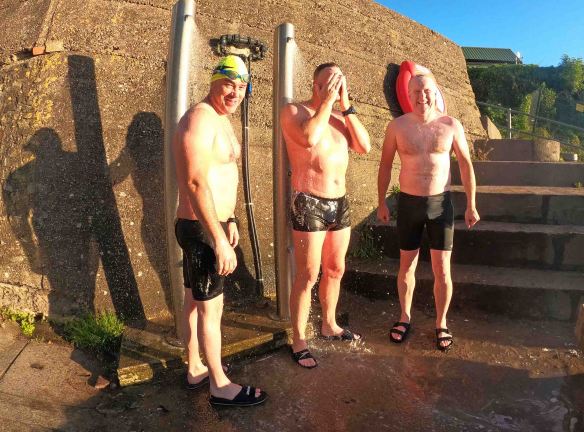 Give Jim a smile when you see him and tell him he’s doing a great job with the cleaning.  He isn’t, but he needs the boost.  Trevor’s at him.

It has been noted by a small picky, picky, picky few of the thousands of satisfied buoy-lappers that the underside or nether regions of the new buoys are not as sparkly clean as when they were first installed. These dirty bottoms are, apparently, causing a degree of discomfort for these picky (×3) swimmers. They (the picky ones) feel that the entirely natural and expected build up of weed and – dare one say – slime on the underside of the buoys is lowering the tone of the Myrtleville experience on their Insta stories. 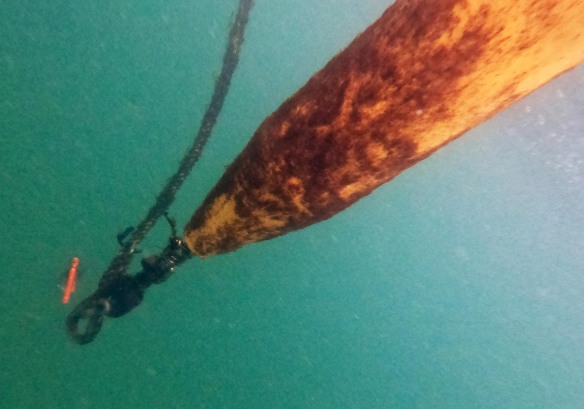 One of the offending dirty-bottomed-buoys.  Thanks, Siobhan 🙂

Never fear, Myrtlevillians.  Today, we are delighted to announce that qualms and concerns regarding the buoys are being addressed – under the command of Lieutenant Commander James Shalloo (Ret’d).

Cap’n Jim (that other rank stuff is way too long to keep typing) is establishing a roster for pair of crack teams to be known as the SAS. That’s Swabbers And Scrubbers, obvs.

Contacted for details, Cap’n Jim was fierce nauticalish altogether about his plans.

“Avast ye”, says he. “This scuttlebutt about seaweed and barnacles wouldn’t have happened on my ship. We’ll enlist two crews – Shanghai them if we have to – and get those buoys shipshape and Bristol fashion twice a week. Swabbers on Monday and Scrubbers on Thursday. There’ll be no swinging the lead either. Not on my watch.”

He really knows Navy talk, does Cap’n Jim.  He also plans to spare no expense in equipping the crews – or at least in equipping himself to inspect their work.  He has demanded funds for this inspection craft.  The Committee for How to say Feck Off without hurting feelings is considering it. 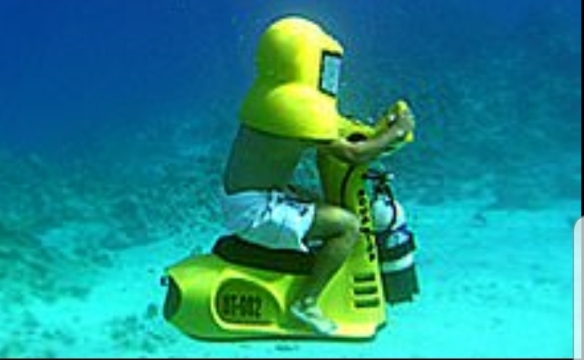 Anyway, all volunteers are to sign up for duty on www.swabscrub.jim and they will be duly assigned their roles as either a swabber or scrubber.  If he likes the cut of your jib, Cap’n Jim might even let you pick which you are.

Form an orderly queue and let’s get the asses of these buoys looking good for the Gram, peeps.

This is important.  Please note and share.  The six safety buoys have been laid out specifically to encourage swimmers to follow a route which keeps us safe.  This means you should NOT swim directly from Buoy 4 at the Dutchman rocks to Buoy 6 at Bunnyconnellan.  To do that means you are out in an area where marine traffic can be passing at speed.  They may not expect to meet swimmers out there. 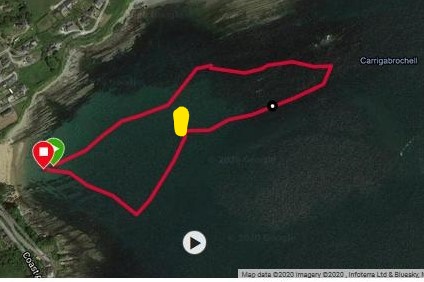 There is a Mariner’s Notice in place for Myrtleville Bay and within the buoys.   Our job as swimmers is to stay within the buoyed area.  Do the dog-leg.  Seriously. Swim Safe. 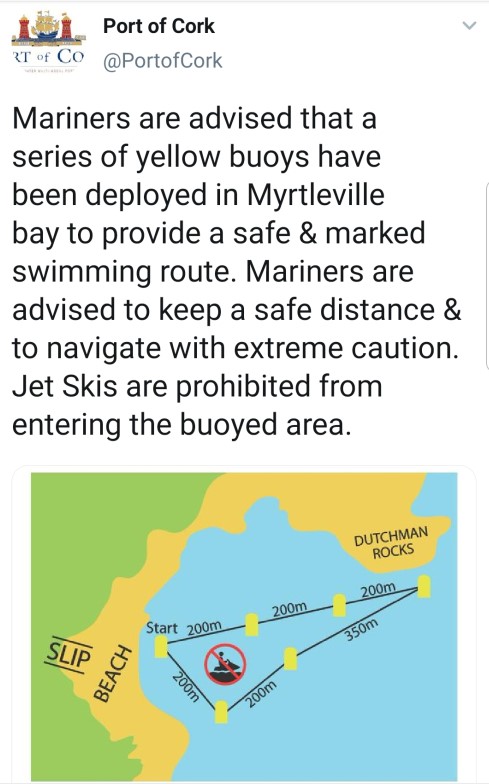 …and the guirls, too 🙂   In fact, let’s hear it for everyone who contributed to getting your new buoys in place – girls, boys and organisations big and small.  Every bit of support was welcome.  They look great and have industrial-strength shackles, chain and ropes, to hopefully withstand the storms which will inevitably arrive.

Just a mention for a few people and organisations who went over and above the call of duty in their efforts to assist.  Sheelagh Broderick and Priscilla Lynch in Healthy Living Ireland got the whole process started and funded the moorings and original buoys.  We have had support and advice from the Port of Cork and funding from Cork County Council through their Community Grants – thanks to Eamonn Mullally and Cllr. Seamus McGrath for guidance on this.

We appreciate every contribution towards the costs and would like to specifically thank Crosshaven Triathlon Club, Cork Distance Camp (Ned), Paul Twohig, Joey Sheahan, Neville Foott, Sandycove Island Swim Club and Dan Murphy.  Marc Lake and Aidan O’Connor have done a huge amount of research and work to try to ensure these buoys and fittings are the best fit for our conditions and to get them installed.  Thanks to all. 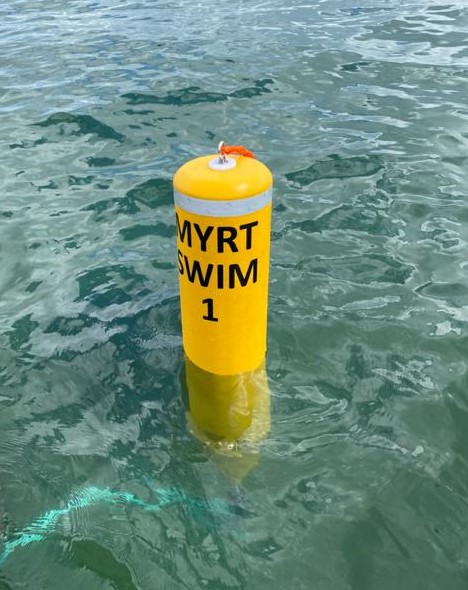 Given government guidelines, it isn’t the right time to try to organise a swim.  We get 200+ people on the beach some mornings, so having an event would swamp us  🙂  Hopefully we will get an event and a BBQ at some point to celebrate.  Thanks again to everyone.

The buoys were manufactured today.  They now need the base and stainless steel eyes fitted.  They are expected to ship to us next Monday.  Weather permitting, we hope to have them in for w/c July 20.  We’ll then try for a celebration swim before the end of July.  Fingers crossed.  🙂

Here’s a slightly dodgy phone pic of them at this stage! 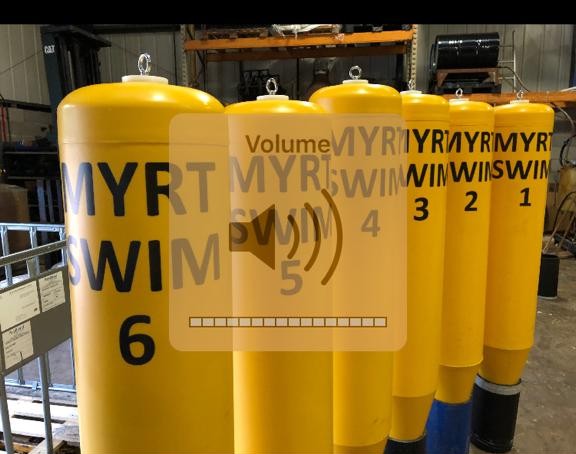 As the Number One not-a-club swimming movement in the world, Myrtleville Swimmers are always willing to lend a hand to new like-minded associations.  Over the weekend, on a brief trip to Fountaina’, we were delighted to meet representatives of a new local swimmers movement to be known as “Fountainstown For Swimmers” (FFS, for short).

FFS spokesperson, Marie Watson – together with non-committee members, Brenda Sisk and Pat Lowry – explained the motivation of the new movement as being to get as many current Myrtleville Swimmers to move over to the wide open spaces of Fountainstown as possible.  Ms. Watson was at pains to point out that FFS was a wholly inclusive movement and absolutely everyone currently swimming in Myrtleville was welcome to move over there as soon as possible.

“We have mountains of parking and room for everyone”, said Ms. Watson.  “We really, really want the multitudes in Myrtleville to come over here to join us.  Nothing would make us happier”.  It is understood that Myrtlevillians resident in Fountainstown will throw open their doors to offer hot showers and BBQs to all FFS associates (they have not actually been told this as yet, but it’ll be grand.   Breda and Daniel are sound.). 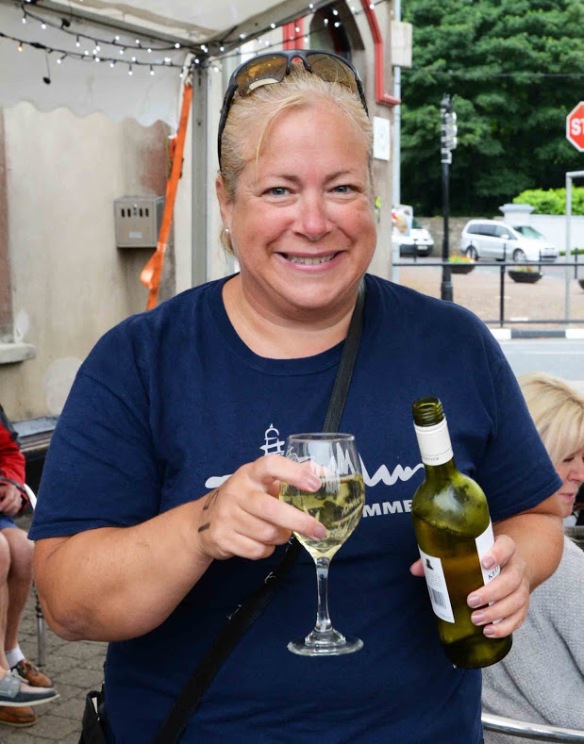 A warm welcome awaits ye all in Fountainstown. #goFFS

Local swimmer, Bernie Lynch – interviewed on de telly by Virgin Media about the new movement – was vocal in his endorsement. “C’mere, until about 2012 ’twas grand down in Myrtleville.  ‘Twas just meself, Pat, Tom and de odd extra fiend some days.  Den dis langer came along and set up a website.  Now I’m walkin’ from de shop here to Myrtleville cos dere’s no parking.  I mean, at least it’s better dan de traffic bandidos of de Wild West down by d’Island, but it’s still a feckin pain.  FFS is right.  I’m all for it.  Go, FFS and take dat shaggin website with ye!” 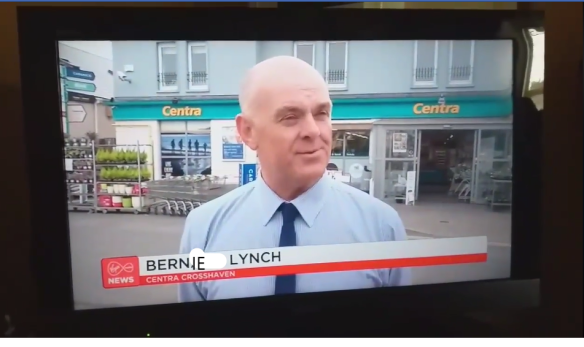 Given such staunch support, this langer will be throwing all available resources of the shaggin website behind the new movement and encouraging the promotion of it through the twitter hashtag #GoFFS.  Join the movemement, people!  Go, FFS!!

It seems a long time ago, but last January it was suggested to Bernard Lynch and myself that some funding from the Cork County Council Community Grant fund might be available to supplement the contributions made by the swimmers for the buoys in Myrtleville.  We got helpful input from Eamonn Mullally and Cllr. Seamus McGrath and submitted the application just in time for Covid19 to shut us all down 🙂

Today we got news that €2,000 had been allocated to Myrtleville Swimmers for the buoys.  Thanks to any councillors who supported this.  We will now be able to fund the buoys and maintenance for the foreseeable future, without having to ask for donations again.

The suppliers of the buoys in the UK are only back to work a week or so.  We are awaiting updates on delivery but chasing them for the earliest opportunity. We will update on this as soon as possible in the next few days.  In the meantime, swim safe.

The AED has been reinstated at Myrtleville, and thanks to Victor Shine, the storage cabinet has been upgraded.

To open the cabinet, no key or code is required, just undo the two clasps on the left. An alarm will be activated upon opening, so hopefully this will deter any undesirables.

Please watch the attached video to familiarise yourself with the operation of this AED.

And remember to always call 999 or 112 to request the ambulance service.

Just a note as large numbers of swimmers return to the sea – the AED in Myrtleville needs a new battery, which Glen Barton has ordered.  A new casing will also be organised in the coming weeks.  The battery costs of about €220 and the cost of the new casing will be covered from donations previously received from swimmers.  Thanks for looking after this, Glen 🙂 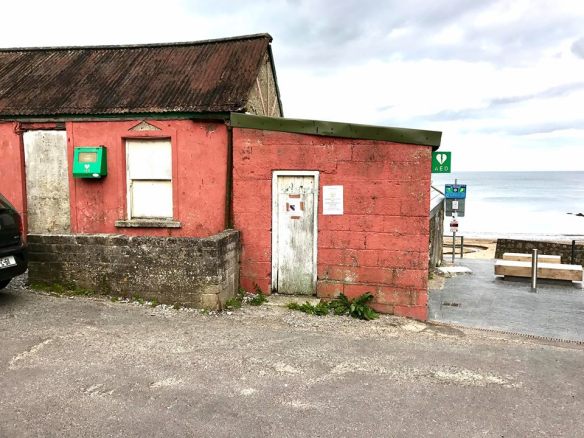 Please remember in the morning that just because you are up, you don’t have to wake the Myrtleville residents. Please keep the noise down. You can enjoy your swim without making excessive noise. Here’s a polite reminder from one resident. To be blunt, they shouldn’t have to remind us – politely or not.

Hi swimmers, since early morning swimming has commenced again. I would like to remind you that because of the physical features of our beloved Myrtleville noise such as voices in conversation and car doors banging is very amplified. We frequently have noise late into the night from cars, their occupants and their music so the sleep window for residents can be quite brief. I would be most grateful to you if you could take these realities into consideration and I wish you continued enjoyment and benefit from your swimming 🏊🏻‍♀🏊‍♂

Myrtleville Swimmers
Create a free website or blog at WordPress.com.