As we head towards the lower sea temperatures, some swimmers are making a decision on whether to take some time out of the sea or continue with a wetsuit, or in togs.  This is an individual decision and should be made on safety grounds alone.  Don’t just follow a group – your safety is your responsibility.

We’re fortunate that much detailed thought has been given to cold water swimming and hypothermia by Donal Buckley on http://www.loneswimmer.com.  In making a decision on whether to swim through the Winter, everyone should read at least some of his many articles on his chosen specialised subject.  His recommended shortlist of articles to begin with are as follows:

WHY would anyone swim in cold water?

“What temperature of water is too cold to swim in?”

How To – Understanding Mild Hypothermia in swimmers

If you want to know more, there are about fifty articles which he has helpfully put in this Index.

The world of OW swimming has been rocked this week by revelations of fraud by International Man of Mystery, Denis Cregan-Condon.  A regular feature in Society pages and noted Babe Magnet, Mr. Cregan-Condon seemed to have it all.

The man in action, magnetting babes.

From Crosshaven to Killary, Lanzarote to Loch Allua, no gathering was complete without him.  The foundation of his fortune was his “invention” of the “Cregan-Condon Compact Cloudburst Purification Pourer”. 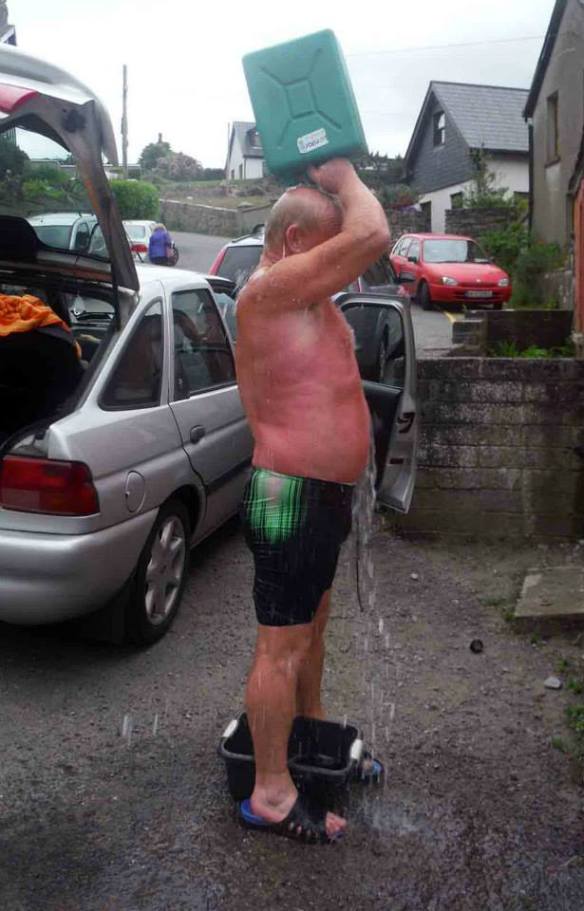 The devious genius of the jet-setting conman is clear from the title of the “invention” – avoiding the use of the word “Shower”.  Once his plan was set in motion by promotional releases on unsuspecting specialist websites (this one), the criminal mastermind just sat back and watched the kudos pour in.

Cregan-Condon sitting back and enjoying the kudos pouring.

Today, exclusively (because nobody else would bother), this correspondent can reveal that the “invention” is a sham, a fraud, a rip-off and a barefaced attempt to scam a pensioner out of the credit for his life’s work.

Thanks to intrepid sleuthing by an undercover agent known only as LaLa, slightly creased pictures have emerged online.  They clearly demonstrate the shower in use by the proud inventor, Mr. Harris, in 1962.

Mr. Harris in action with his Shower. The one and only.

Despite some initial reservations that Mr. Harris couldn’t actually have looked like that in 1962, independent confirmation was received that he has actually looked the same since he was three.  He was a very distinguished child, insiders said.

Mr. Cregan-Condon was not available for comment as we went to print.  Calls to his main office at the top of the slip in Myrtleville went unanswered.  With his reputation in tatters, it remains to be seen how he can restore his position in swimming circles.  Is this the end of the line for the self-styled International Man of Mystery and Babe Magnet?  Will his days of carousing be over? The world awaits…. 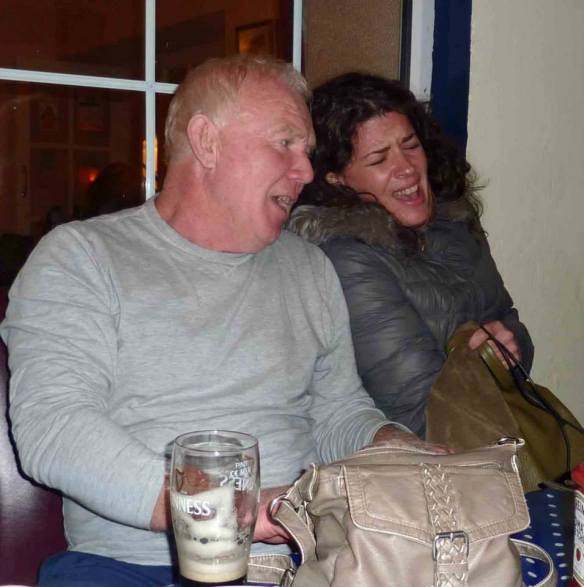 NOTE: Got a tip-off?  Know something that the world should hear?  Get in touch on TOTESMADEUPBALLS@MYRTLEVILLESWIMMERS.COM.  Reward of a 4 hour swim with Mr. Finbarr on Christmas morning to anyone who provides a tip-off that’s published.

Real clubs run by serious people have AGMs.  I was reminded of this when I received Angela Harris’ excellent minutes for the Sandycove AGM.   It made me wonder – if   Myrtleville Swimmers had an AGM, how might that go?

The Turkey Swims have really come into their own this year, encouraging nearly sixty swimmers to Myrtleville on Sunday.  Before that, there was a nice group of a dozen or so in at 8.15 on Saturday morning too.  Pride of place goes to Jamie O’Donnell who decided he’d had enough of the wetsuit after the Summer and wouldn’t be needing it for the Winter. 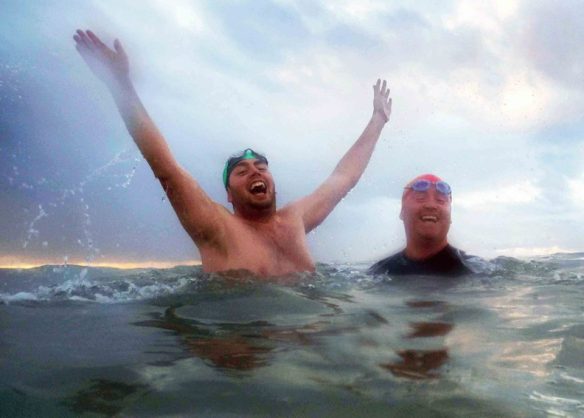 Jamie O’Donnell jumps for joy at shedding his wetsuit.. 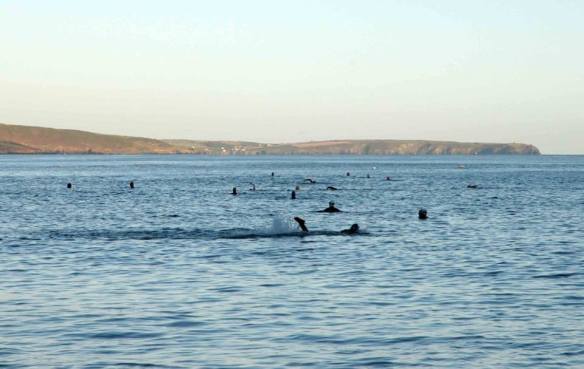 November – not August. Great to see it.

Some Turkey Swimmers on the way – basted, but not frozen. Yet.

Well done to all involved in the Turkey Swims.  Still five more to come.

Thanks, as ever, to Siobhan Russell for these.  SE winds not conducive to calm in Myrtleville.

Water temperatures still holding up in double figures – over 11c most of the time, so we’ll have no complaints about November 🙂

The temperatures out of the water have stayed up too, so we’re still over the magic 20c combined.

There was a great group swimming in Myrtleville on Saturday morning and the Turkey Swim attendances in Sandycove this weekend also stayed high.  Next Turkey Swim is on Sunday 23rd (next weekend) in Myrtleville.

The early morning swims are always worth it for the sun – when it breaks through.

Gary and Jim can see the light.

Some swimmers have a theory that the water feels warmer when it’s a bit rough.  The froth warms it up, they reckon.

Of course, there are times when that theory doesn’t work out – like when that first wave hits you a bit early. 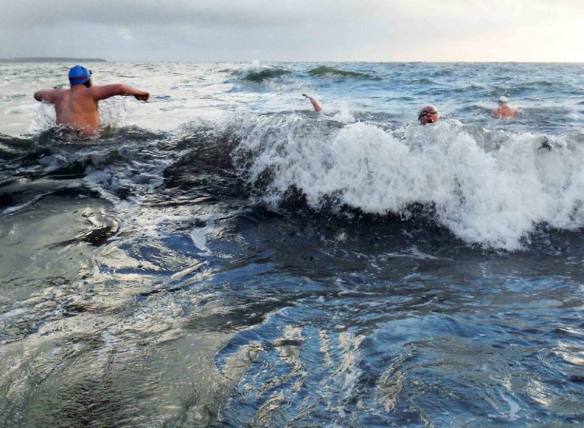 Not the nicest of mornings for a swim, but doggy paddling was still an option from the back beach in Fountainstown.  “Lumpy and Currenty”, Bonnie commented.  A bit like a good bone, I suppose. If dogs comment, or can spell….

At least the salty dogs tried.  Some people went all the way to the beach then left for the pool…

Pool or sea, pool or sea? I like my comfort. Pool.

Still Southerly tomorrow so a careful splash in the waves is all that’s likely at 08.15.  Has to be done to keep up that ould habituation and acclimatisation stuff (see loneswimmer.com for what that means – I just copied it). 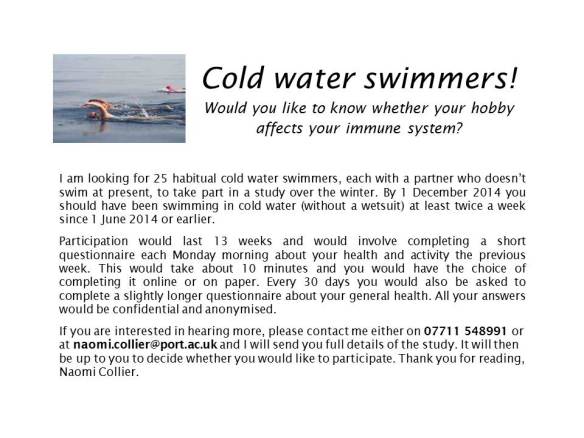 Not a bad morning for the first Myrtleville Turkey swim and a good turnout as well.  As usual, Siobhan has loads of pictures on her facebook page.

Carol Cashell was away so Angela Harris made one of her all too rare trips to Myrtleville to take charge of the money.  Fair dues to Angela, even though it’s only about once a year, she always gets into the Myrtleville Way and leaves a picture moment.  This time she opted to Do a Denis – the patented water-saving methodology created by Mr. Condon.  We’ll have a vote to see who does it best… 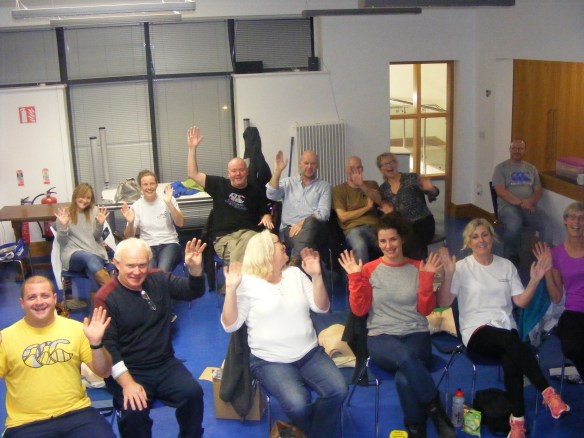 Another successful night of CPR/AED training. Once again, a very keen and eager bunch. We  should once again thank Victor Shine for the use of the coast guard station which was a fantastic facility. Top notch nosh (say that fast) came from my lovely wife, Denise and thanks also to Adrian Bishop (other instructor) for giving me a big hand out.

Things are really taking shape now to make our little Myrtleville swimming community a safer place to be. 24 People in total now trained on CPR/AED and choking for both adult and child. This is in addition to the already local voluntary personnel in the area.

Depending on numbers I would hope to do one more training night before Xmas. By this I mean that if I don’t have enough to fill a full class I’d like to run a refresher night purely on the skills that were taught before we move on any further.  Because of the amount of questions and information passed on in both courses, I felt that those already trained up could do with a little more practice on skills alone.  This would consist of: I would set up in a room with a manikin and rescuers would come and practice under supervision. It would take no more than 20 minutes per person.

If anyone is interested in a place on the next course and you have not already done so, let Damian know – myrtlevilleswimmers@gmail.com.  There are seven names down already.