As the home of swimming in Cork, Myrtleville is rightly seen as a leader in all areas of right-thinking-swimmy-stuff.  As part of our leadership role, the proliferation of “lap achievement” awards from smaller, more Westerly swimming groups (if three people on a good day counts as a group) has been noted.  Hats and T-Shirts abound for any-old-number-you-fancy-yourself, down West.

In a carefully considered response, the Committee Of Nominations Around Really Tough Individual Swimmy Thing Stuff (work out that acronym for yourself) have today announced what is sure to become the pre-eminent, sought-after award for all aspiring sea swimmers, The Goat-Free Myrtleville Marathoner 2 & 1/2 Dutchman Laps Award.

Guideline map of Two and a half a laps with clear numbering system.

While other “awards” are handed out like confetti to anyone who picks a number of laps out of a hat (and then puts that number on a hat), our criteria are different (now there’s a surprise), transparent and are – in fact – the most tremendous criteria ever for an award system.

The numbering system shown above – as provided by Mr. James Shalloo – to determine how many half laps (#goat-free) have been achieved follows a sequential process in iterations of one from the first to the third in relevant marker points, each of which marks a point on which one of the sequential numbers is marked.  How clear is that?

If you’re still in doubt, here’s a clearer picture of a lap around the Dutchman to give you guidance.  Note lack of goats and the precise angles of turns required for lap measurement.  On this point, please note that submission of Strava data to verify laps is strictly forbidden.  It is understood from sources at the North Corkorea Camps that this data is being used to track the vast volumes of swimmers in Myrtleville, as a pre-cursor to further attempts to lure them away to the “fresh” water. 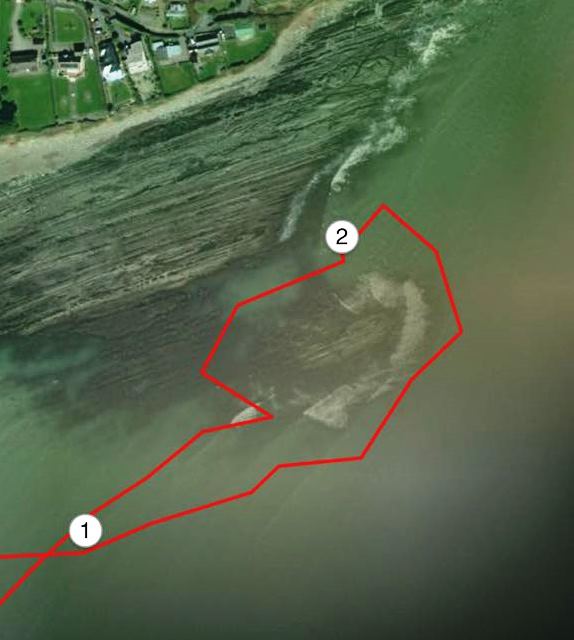 The Award will be overseen by internationally-renowned marathon swimming coach, Eilis Burns, who is herself one of the first proud recipients. Ms. Burns rightly attributes her international success in Spain a few years back to her annual dip in Myrtleville.  Ms. Burns will be supervising training plans and ensuring that all aspiring swimmers are fully prepared for this challenge.  She is pictured here at the Announcement of the Award and Inaugural Recipients.

As ever, Viva Myrtleville!