With boiling sea temperatures, there’s really no excuse not to get 1,500m or more done in the sea and get entered for the RNLI Myrtleville – Church Bay Swim on June 18.

TV3 visited the beach yesterday and carried a nice piece on water safety and training for the RNLI swim, as well as an interview with our new pin-up mnás, Ann Lynch & Fiona Foley and lingering shots of Anne Sheehy preparing to take off. 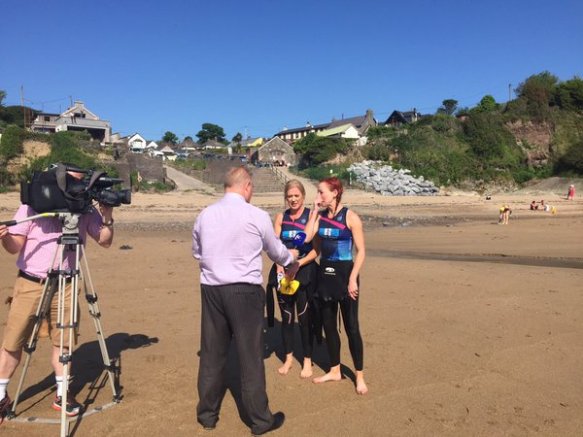 I just love the look of awestruck respect from Fiona as Ann waxes lyrical on her chosen specialised subject of sea swimming. No wonder Bernard is so knowledgeable with Ann to guide him.  Fiona never knew that Ann was a font of knowledge on tides, weather etc.  We’ll have a night down in the Coast Guard Station with her soon.  “An evening with Ann”.

The camera loves her – lingering shots of the Myrtle Turtle preparing to swim.

So come on everyone – be inspired and get entered.