Unfortunately – but EXCLUSIVELY!!! – this column can reveal that any semblance of peace in the Myrtle Turtles Channel Relay camp has been shattered.  While Talks about Talks regarding the Patso and Myrtle mascot situation were ongoing in Farranree, the stakes were suddenly raised by the master of brinkmanship, Mr. Eoin Lowry.

Some uninformed observers assumed that while the exploratory talks were ongoing, there would be no more escalations of tension.  They were wrong. After a training swim yesterday, Mr. Lowry announced he couldn’t see why he had to dry his own feet with all the Mnás around and shouldn’t one of them do it for him, like?  If not, he’d have to find more like-minded team-mates, like.  Fellow Turtle, Ms. Sheehy – was shocked. Recovering from her shock – Ms. Sheehy sent in the heavy mob.  Don Con “reasoned” with Mr. Lowry – as only he can – and explained exactly what could be done with the Lowry feet.  The confrontation was explosive and strong words were exchanged. 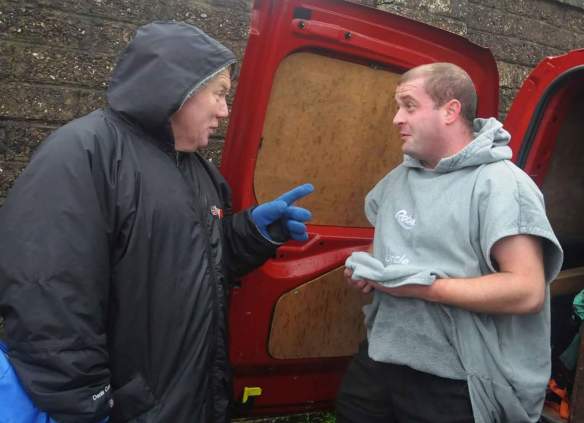 Making him an offer he better not refuse – Don Cregan-Condon “reasons” with Mr. Lowry.

Mr. Lowry departed the scene – burning rubber and hitting the road in spots.  He came back for his van later.

Late last evening it became clear that this escalation had been carefully planned.  A PR firm representing Mr. Lowry released staged pictures of him with what are described as potential new team members who are on his wavelength regarding Patso and other key team strategies.

An accompanying document states that if Patso is not declared to be the official team mascot within one week, Mr. Lowry will have no option but to appoint new team members. Failing this, Mr. Lowry states that he “can not be responsible for the consequences”. No further explanation of this statement was forthcoming.

It would appear to this observer that the whole “foot drying” episode is nothing more than a ploy to force the hand of the other Turtles into accepting Patso as mascot.  As ever, further developments will be reported here: FIRST!! and EXCLUSIVELY!! as well.