There’s lots of new swimmers around Myrtleville and it’s a shame really that most of them won’t have met Bernard Lynch, FOWS, or know what he looks like.  He’s a great guy and before he became a full-time POOL swimmer, he used to be around the beach a lot. Here’s a pic of him when he was kidnapped and forced to display inferior hats down West. 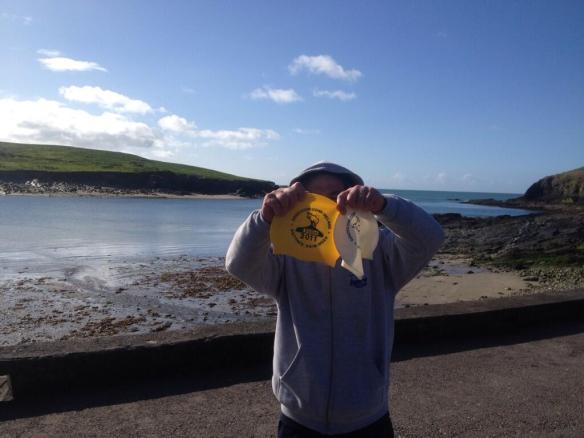 Unfortunately for us down Myrtleville way – some time last Summer, Bernard fell under the spell of famous coach, Eilis Burns.  Eilis believes that all swimming should involve chlorine and that open water swimming is to be undertaken every 40 years or so.  Now, to be fair, Eilis has street-cred on this point, having not gone into the sea herself since Cork to Cobh in 1973 and then leading the field home in Spain in a very tough 22km earlier this month.

Eilis told Bernard it was POOL all the way if he wanted to achieve long swim success like her and he has had to abandon his regular saline therapy.  Here’s another good pic of him as we remember him…..that’s him at the bottom, there.

It would be great to get him back to the beach, so maybe we could organise a petition to Eilis.  If you’d like Bernard Lynch (Former Open Water Swimmer) to be allowed back to the sea, send your emails to freethemyrtlevilleone@eilisinthepool.com or call in to Source at any time of the day or night when he’ll be there – going up and down, up and down, up and down……Cruel, is what it is – cruel.  One last picture of him….so you’ll know him if you see him.

Hopefully Eilis will relent and Bernard can be a Future rather than Former OWS again. Free Bernie!!