We don’t often have long posts, but some things just deserve them.  Here is Part 1 of Trevor Malone’s very personal review of his successful English Channel Solo from 1 August.

It’s 27th of July and all the training is done but still feels like I need a few more months of hard training. It’s possibly a nervous reaction to tapering, never liked tapering. Channel year training started during the 2nd week Sept 2014 with Eilis and now it’s possibly 2-3 days before I get to swim the dream that I first thought about when I was 15yrs old.

After completing Gibraltar in July ’13 I just knew the Channel would happen. Ned Denison helped with organising my pilot (had also got great advice from Lisa Cummins, Rob Bohane and Carol Cashell). Slot was booked and Eilis agreed to train me (proviso was to do it for charity and to do what she asked me to do). It would be 21 months for 2.2 million meters of hard work fitted in around working shift. If I missed a session I had to make it up no matter what. Coach Eilis drilled this into me. Anytime we met first question was how was I feeling, second question was how much was I doing that day and third question (the one that everyone struggles with) was to check if I was on target for the month. For Coach, doing the mileage was number one priority and eating properly was priority number two.

As part of the build-up and preparation, swimming Lake Zurich proved a very valuable learning swim (both positive and negative). I didn’t get my feeding right but I managed to swim through both a mental and physical pain barrier I had never experienced before. Concern was; the positive will get you through certain points of the swim but the negative was a potentially show stopper. Bottom line was, I liked to swim on empty but this was not possible on a 12hr+ swim. I needed to get my feeds right.

The crew consisted of Liam Maher (swam Gibraltar with Liam and we all broke the Irish Record together – great memories of screaming at him with seconds to go to touch the rock ), Carol Cashel, (swim buddy, everyone’s friend and super competitor) and Ken Rodgers (long-time friend, trained for and swam Lake Zurich with him in 2014).

So anyway I get a call from Liam on the Monday 27th July and he tells me the pilot says there’s a good chance of swimming on Friday. I have to sit down for the remainder of the conversation, chills down the spine, goose bumps, and hair on end. I’m nervous but so pumped. It’s now really going to happen. This is the start of the positive mind-set towards the next few days. During the last few weeks of training coach focused a lot on getting my head ready. Everything was falling into place. I book flights for the crew and this is the last thing I had to do, my crew took over everything from here onwards. 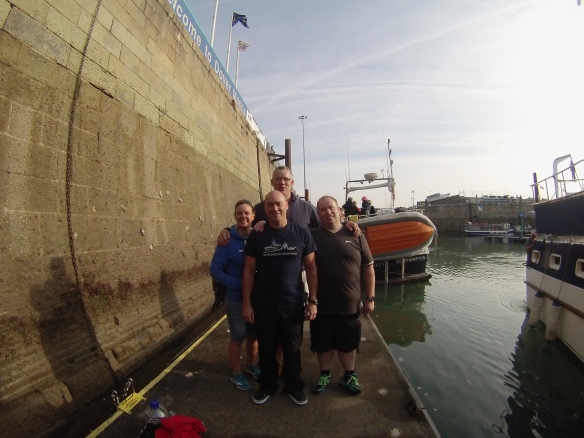 If Carlsberg did crews…Liam, Ken and Carol with Trevor.

When we land in London, Liam contacts Pilot and Saturday is confirmed as go. When we get to Dover, we drive in the far side through the town. Liam and Carol point everything out. We stop at Swimmers beach, I touch the Channel water with my hand for the first time and I’m buzzing. Clear blue skies and we can clearly see the French coast line. What a rush for all four of us. It was great to see my crew just as excited as me. I’m pretty much gone into the zone now, it’s nothing but visualising the swim from start to finish and how much I’m going to enjoy it in between. Simple thoughts – breathing every four, long stretching strokes, feeding off my swim buddy’s energy when she’s in, all the feeds going right, the French beach at the far side. Staying in the moment; not thinking ahead, not thinking back.

There are some demons but I’m trying hard to keep them out. When we get to Varne Ridge Campsite the emotions are high, Páraic’s plaque on the campsite is very visible and his bench is across the road looking out over the Channel. We visit the bench. Can’t imagine what is going through Liam’s head, but I’m torn up inside, I can see it on Ken and Carol’s faces also. What Liam is going to do for me in two days’ time is beyond all words. He’s going back to the same Channel with the same pilot just to help me achieve my goal. It’s been playing on my mind for the last few months. I have my own personal goal but I’m not going to let him down. Liam has naturally assumed a leadership role within the crew and uses the moment for motivating me and it works. Páraic’s bench in Sandy Cove has huge significance for a lot of swimmers. Sitting on his bench in Varne Ridge looking out over the channel was just so emotional.

The day before the big swim, we all swim in Dover Harbour. I wear the swim gear I’m going to have on the next day. This includes my Myrtleville hat. Some more mind games for myself. I’ve worn the hat once before (in Myrtleville of course), this is the second time so tomorrow will be the 3rd time (lucky number 3). The hat is linking me to being the 1st Myrtleville swimmer to swim the Channel. Moonrock and back, flat house and back, Fountainstown and back and the odd trip out to the Dutchman, it’s all behind me now. Carol, Liam, Eddie, Bernard and Orls all in support. Long swims with Bernard and the local seals. All the attempted long swims with Bernard that had to be eventually abandoned, weather always acted up but looking back now it was a godsend. The one or two hour swims that we did slog it out would stand to me towards the end of my Channel swim.

Coach phones that night, emotions are high; she knows where I’m at and I know what this means to her, it’s a very reassuring chat. She has a bit of a wrap sense of humour though; she tells me I’m going to get in at one beach and get out at another and there’ll be a bit of a swim in between. I can’t remember how many times I tell myself this when I’m swimming across.

The morning of the swim the nerves kick in. Crew are in full control of everything, they’ve packed everything we needed the night before and ensured everything ran like clockwork that morning. I’m too nervous to hang around so I go across to Páraic’s bench. Flash backs to Ned’s motivating speeches and how moved he is every time he talks about Páraic. It’s like he’s right in front of me telling me to visualise myself walking up onto that French beach. It’s all starting to get to me; I need to be with my crew so I head back. I’m back with them and all of a sudden I’m completely overwhelmed. I just fall to pieces. Liam steps up and gets me through the moment. The fear I felt moments earlier is gone. I just knew after swimming Gibraltar with Liam that I had to have him on my crew; the role that he played for the next 14hrs puts me forever in his debt. Main motivator is how the observer described him (last person to hug me leaving Varne Ridge but he would be the first to hug me when we reach the French Beach).

Before I know it I’m standing opposite ‘Optimist’, my boat. I’m no longer nervous, just completely focus on what lies ahead, everything is now so positive in my head. We bump into Trent Grimsby (Channel World record holder, whom we met the night before) and he wishes me good luck and jokes about getting back in time so he can get out early the next morning with his relay team – he’s booked with the same pilot. 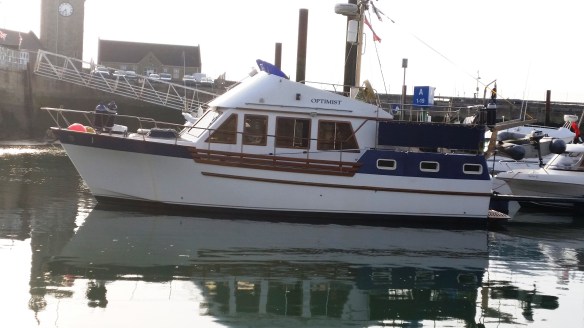 There’s no hanging about, we board and we’re straight into the safety briefing. Then the pilot drops a bombshell regarding support swimmer. He wants to know why would I want a support swimmer, he doesn’t like the idea and thinks they cause too much disruption. I’m watching Carol and she gives nothing away, she has a look on her face that tells me she will be in the water with me as planned and pilot won’t be stopping that. This is the reassurance I need. Everyone who knows Carol knows (besides her genuine friendship) how focused, professional and giving she is when it comes to swimming. Absolutely nothing is missed and she knows what Paul the pilot has just said to me is a ticking bomb. How she handles the situation is just amazing, she knows what could have happened and is in full control, this is my swim buddy, and she made sure nothing was going to distract me. Prior to this year, swimming in cold water (for me anything below 14C) was not enjoyable; with Carol I was doing 1hr swims at 10C. Swimming with Carol was almost effortless, we’d get into a rhythm and distance and pace were never a problem. Parts of some sea sessions I was able to breathe every 6, totally relaxed inside, able to feed off her energy. I get into a comfort zone that reassures me when we are training that if I’m in trouble going across, Carol will be there and that will get me through it. I’ll just slip into the positive zone and we’ll fly along. Back on board the Optimist, I’m in the zone; we’re going to have a great swim.

We’re just minutes away from the start, Ken is sitting next to me and we’re both really calm and relaxed. Chit chatting away, oblivious to the fact that I’m just about to try and swim across the English Channel. This is what Ken is all about, calm, relaxed and solid head. This is the guy that if I started moaning at any stage would just very calmly tell me to “shut up and just swim, it’s what you are here to do”. There is a friendship here that goes back a long way and adding to that we trained and swam Lake Zurich together in 2014. There’s no bullshit about this guy, he’s a rare breed when it comes to open water swimming. This year he turned up to do the 6hr swim at Ned’s distance camp (having only swam twice in the sea all year) and finished it with a smile on his face (approx 10 highly experienced marathon swimmers dropped out that day but no bothers to him, he was there to swim so he swam). I start to get ready and Ken looks after all my gear. Then he turns and says,” do ya know ..I’d love to get in and swim across”. He makes me feel so lucky. Here I am, with this great opportunity, he’s made me feel so relaxed, the mind-set was just perfect. I really couldn’t have asked for a better crew member.

We’re almost at Shakespeare beach, Liam applies sun block and greases me up (see pic below for how much he enjoyed it).

The short trip out is over and I’m ready to get in, the crew are buzzing and send me off on a complete high. 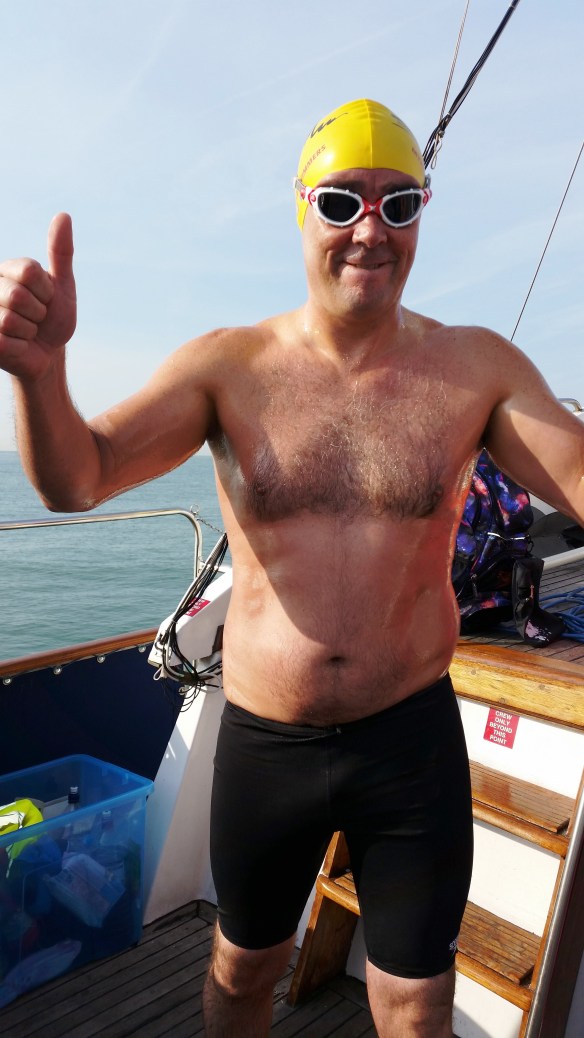 Part 2 in a couple of days.