It’s been demanding enough to perform to the required levels for Ms. Russell and her photos, now we have to act on video as well, with Buzz Frost directing.  Two very nice videos showing his skills progression from the dizzying effort last week…here’s the first one:

In fairness to Gary, he’s no daw – as the saying goes.  Like the rest of us, he hasn’t a snowball’s chance in hell of keeping up with Speedy Cashell.  So, he sidled up to the Cashell sisters and said if they just slowed down a bit (about quarter speed), they could be in his movie.  Genius.  Now he’s touting it as proof he’s as fast as Carol….Voila – slow-mo swimming:

The funny thing was, I saw this picture below by Siobhan before learning about Gary’s master plan.  I thought he was trying to race Carol and just thought….”I pity de fool”….Little did I know he had stacked the odds in his favour. 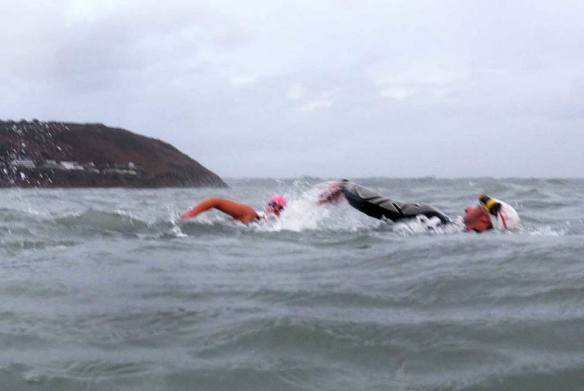