Last week, it suddenly dawned on me that I was little more than a month away from my attempt to swim around the Channel Island of Jersey, a swim that I’d hope to complete in a little over 10 hours. Without any properly long sea swim under my belt this year, I decided that I’d better attempt a 6-hour (standard qualifying swim for English Channel and other solo swims) training swim soon. Bernard Lynch told me that he and Damian O’Neill were planning a 3-hour swim on Thursday so I decided to link up with them for that. With various swimmers kindly agreeing to join me for all parts of the swim, I was ready to try the 6 hours starting at 12:00 and finishing at 18:00 on Thursday, 20 June.

I arrived at Myrtleville at 11:30 to allow the extra time that it takes to get ready for a 6-hour swim, i.e. the time taken to get properly greased up and set up a feeding station. Bernard came down for the start and gave me a very handy bucket with a tyre tube, rope and diving weight – the perfect floating feeding station!

I started at 12:05 with Maeve, Dave, Aidan, Orlando and Roger. Ossi also came to see the start of the swim and Martin came along shortly after. The sea was colder than my usual training spot in the River Blackwater but it was the warmest that it had felt all year! I was still nervous, though, but knew that the only thing to do was to keep putting one arm in front of the other…

On Bernard’s advice, we first headed for Fountainstown. My goggles were fogging up all the way there, but they always settle after about half an hour. It took about 35 minutes to get to Fountainstown, at which point I took an SiS gel – I’d never taken a gel before so wasn’t sure how my stomach would take it, but it went down well and it was handy to be able to have the gels stuffed into the back of my togs! The water felt much warmer in Fountainstown so I was inclined to stay there, but I knew that I had to go back to Myrtleville to get liquid feeds. I headed back (a little faster than I got there as I was going with the wind and had a better line due to clearer goggles) and met Bernard and Damian who were just starting their 3-hour swim.

I eventually found the feeding station and took a few gulps of a Sponser carbohydrate (with electrolytes) drink. Keeping the feed as short as possible, I headed towards Fountainstown again with Bernard. I turned back after about 25 minutes as I was meeting Gábor in Myrtleville at 14:00. When I got there, I met Maeve finishing her swim and spotted Gábor coming down the beach. While he was swimming out, I took some of my High5 4:1 drink for a bit of protein as 2 hours was my longest open water swim this year and stuffed another gel down the back of my togs. I was starting to feel a bit cold at this stage but knew that I’d be alright after picking up the pace a little to stay with Gábor.

We headed off in the direction of Church Bay as the tide had slackened off and I felt like going in a different direction. It was a fair bit choppier and colder in that direction. When we got into Church Bay, I had another SiS gel feed and was anxious to swim back at a good pace to keep warm. It was a tough battle against the chop going back to Myrtleville but we got there in the end! There, we had another feed and decided to head off in the Fountainstown direction again as it was warmer and flatter! We got most of the way there and came back to Myrtleville again. It was now 16:00 and Gábor, Bernard and Damian finished their swims. I felt like getting out too as I was feeling pretty cold, but it wasn’t really an option! After a 5-minute circuit of the beach area, I met up with James, who was planning to swim for 2 hours.

The two of us headed off in the direction of Fountainstown and again, I turned back after about 25 minutes as I had to be in Myrtleville at 16:50 to meet Eoin, who was planning to swim the last part of the swim with me (Eoin and I are on the same relay team for a 2-way English Channel crossing in July). I really felt like getting out at this stage so I told Eoin that a few minutes just to take me to the 5-hour mark would do me – he didn’t seem to mind too much. I was beginning to shiver slightly at every stop at this stage. I took a High5 gel with some caffeine and the two of us took off to Fennel’s Bay. When we got there, it was exactly 5 hours into my swim so I was happy to get out once we got back to the beach. A dense fog came into the beach just at that point so James wasn’t long getting out also. Eoin kindly towed the feeding station in for me and I finished with 5 hours 10 minutes under my belt. 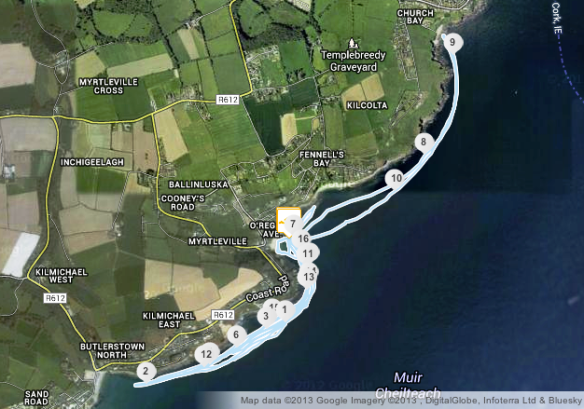 I was cold when I got out but my shoulders and mouth (long swims give you a salty mouth) were feeling pretty good for 5 hours in the sea. The general consensus was that the water temperature was about 13ºC in Myrtleville, a little warmer in Fountainstown and colder in Church Bay. Siobhán took our photograph when we were changed and it was up on Facebook before I even got home! Sincere thanks to Bernard for all his help in getting the swim set up and to Maeve, Dave, Aidan, Orlando, Roger, Damian, Gábor, James, Eoin and everyone else who swam with me on the day – it was much appreciated. I may not have done the 6 hours but I did manage to achieve all of my other objectives in the 5 hours 10 minutes that I did swim for…