Carmel Collins completed the first ever swim from Ballycotton to Ardmore (Cork to Waterford) last weekend.  She plans to put a complete account of the swim on her blog, but has done a summary here of the great swim.  Very well done from everyone in Myrtleville.

I had my eye on that swim for a few years now, but originally I wanted to go to Youghal.  After the Myrtleville to Monkstown swim this year, I started planning it and so I thought, “Why not make it longer?” . The distance is 25km as the crow flies but I ended up swimming 27km in 11.37.55.

When we were bringing the stuff aboard there was a funny moment when I picked up a basket which I thought was the Jacobs Cradle.  I said to Imelda, “How in the name of God will I fit in that?”  After she laughed her heart out, she then informed me it was a lobster basket – LOL!  After months of planning and the last few windows falling through, it finally came.   The start was 4 am on Sunday the 23rd at Ballycotton pier. I was very excited.  My crew members were my daughter Kayleigh Collins, Imelda Lynch, Annamaria Mullally,Tadhg Harrington,Skipper Jack Hickey, Ann O’ Connell, Noel Ruaney and Robert Scarrott with Ossi Schmidt.

I was very relaxed and happy before the swim – I was in great form. When I got onto the boat and when I was getting greased up my legs got a little shakey.  Nerves kicked in and I got a little worried for a moment . There was a slight wind there.  After getting greased I made my way off the boat and over to the start which was a ladder at the side of the pier. I got down very slowly.  Every step was nerve racking in the pitch black.  I said to myself, “This is it.  Just go for it and do your best”.  The whistle went and I was off.

The tide was with me for the first 2 hours and after 5 hours it got rough – pulling and pushing.  Every time I turned for a breath, I was lucky to get air.  A lot of the time I couldn’t get any. I got pain in my right arm at this point also, so I had a bit of a break down because I was swimming and not getting anywhere . It was very frustrating  – so my crew were saying “You are moving!” and I was saying “I’m not!!” 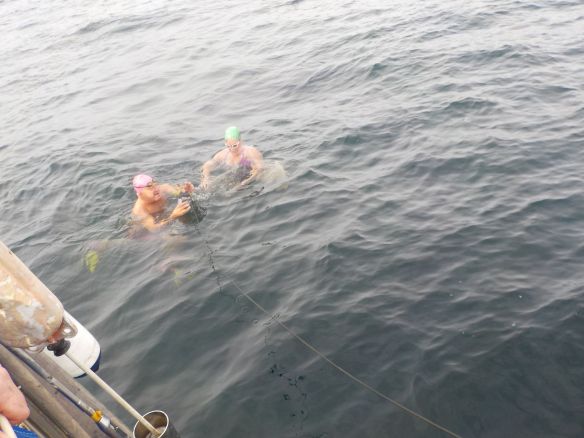 I wanted to land in Youghal at that stage so my first support swimmer came in for an hour, Tadhg Harrington. I managed to put my head down and with kind but firm words from my crew kept going right until the end .

I had trained for this in Myrtleville and Sandycove.  I did the Myrtleville to Monkstown swim, then trained away. Then I did the Distance camp and I completed a 6 hour at the end of it . I also did a little triathlon training – so it was a bit of cross training. Most of my swim training was done in the sea. 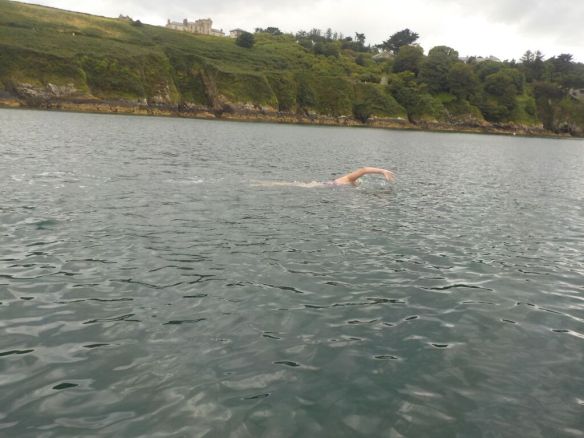 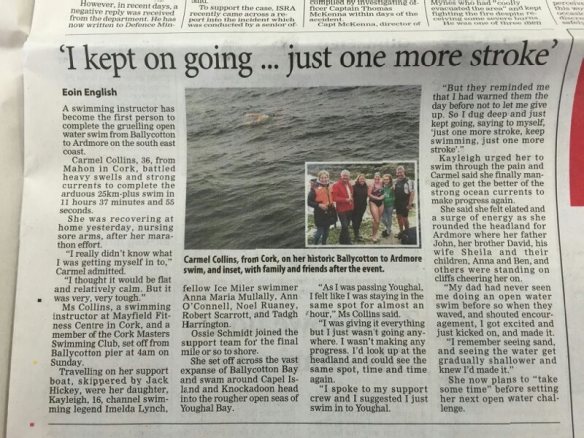