Still, it didn’t stop over forty swimmers last night, with lots of smiles.  It might be slightly chilly, but it’s still great.  Our fantastic Siobhan Russell was down again for the pictures. Looking forward to seeing her recovered and back in the sea very soon.

I know it’s unfair to pick on people on this site and I really shouldn’t do it.  Having said that – Gary, seriously, have you even taken to drawing lines on the sand to ensure you get just the right stance width?  All of the Orcas in the picture – excellent work. Gary, though?

Lots of the triathletes are getting their OW training done – chilly or not – as their season really kicks off.  I have to mention the new Orca Open Water suits again – great visibility.

The McCarthy brothers weren’t just getting a swim in, but having a healthy big vs small brother race. 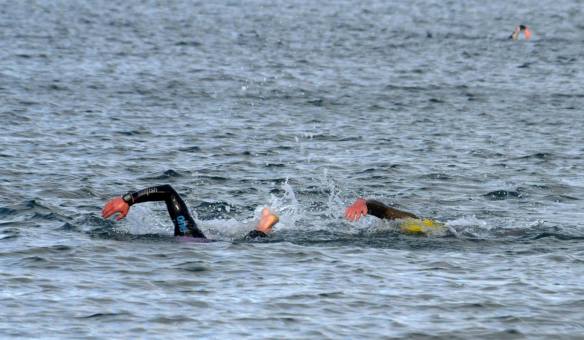