Seven weeks to go.  Don’t miss this event.  Get swimming and entering.

In 2011, the swim was moved to Camden, due to unfavourable weather at Myrtleville.  Judging on the picture below, they bashed down the metal fences to get in there – although that could have been done by Micky, Kenneth or Roy, I suppose.

Then a mad fella in a wetsuit sent them forth into the sea.  Plenty of them looked dubious about it.  Good to see Moz had used a few bottles of fake tan and had waxed for the day. 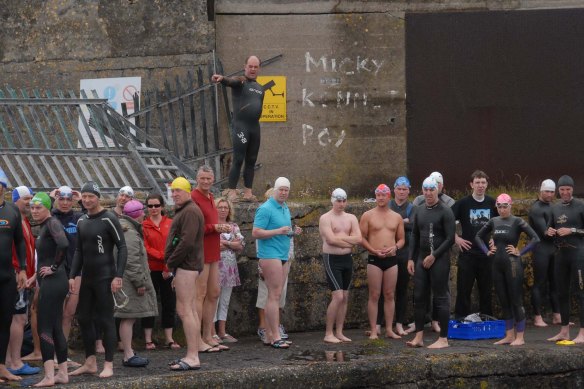 To be fair, it must have been bad if even No. 55 was biting his nails in anticipation.

ECHO SPORT – Event organiser Bernard Lynch shows some of the competitors the route prior to the start of the 2nd annual RNLI 2k Open Water Swim at Fort Camden, Crosshaven (pic Howard Crowdy)

Get swimming and entering for the 2015 event.  Not to be missed.