The first year I swam in February was 2012 – in a wetsuit.  I got brain freeze, followed by dizziness, followed by a sharp exit from the water after eight minutes (that had a bit to do with the seals in Adrigole Harbour too, but mostly the cold).  Clearly (looking at the land temperatures table below), I was a total wimp.  On average, February 2012 on land was way warmer than this year – so we can expect the sea was too!

My wimpiness in 2012 is confirmed by the many Myrtlevillians who made the decision to swim through the Winter this year and have taken any weather thrown at them.  Dizziness?  Brain freeze?  No problem!!   The coldest month is over and we now have up to twenty new year-round swimmers.  Very well done to everyone.  A few of the many pics Siobhan took during the month…. 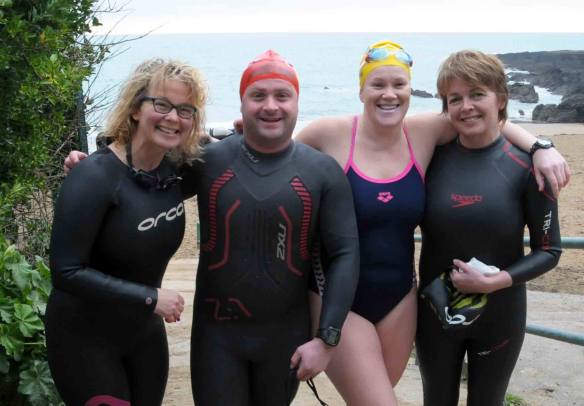 So now we can all agree – the open water season runs from January 1st to December 31st.  We’ll all be roasted in the Summer.