As anyone following various tweets will know, there’s no greater supporter of Myrtleville – and The Hat – than Angela Harris. She was so excited about finally collecting her very own hat on Saturday, that she slept through her alarm.  Fortunately, Mike was on hand to save the day and collect it for her.

Mike Harris delighted with his new hat – and one for Angela, of course.

She was just thrilled when she met him later and was greeted with..

I got you a present, Angela..

Angela & her hat – happy together at last.

We had over twenty in the water on Saturday morning – some incognito: 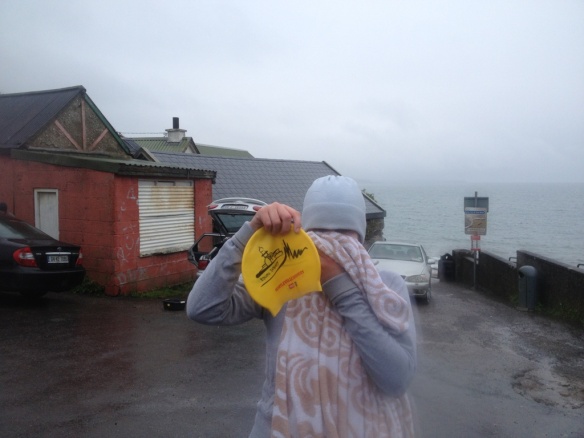 Agent O – fresh from her daring Sandycove mission – collects her hat. Important to keep her identity secret for other missions.

Being a long weekend, there was a lot of swimming, even in the miserable conditions.  Siobhan Russell was in the West.

The swimming event of the weekend, however, was a bit closer to home.  Finbarr Hedderman, preparing for his North Channel swim in July, swam for six hours in Sandycove on Saturday AND Sunday.  That’s incredible swimming and well worth a mention.

Finbarr Hedderman heads for home after his second six-hour swim this weekend.