What started as a chat about swimming home from Spike Island after a 5k run saw four Myrtleville Swimmers jump on a rib at 0830 on Saturday 29th July and head for the West Camber at Fort Camden. Gary Frost (togs), Ger Venner, Ian Heffernan and Maeve O’Connor (wetsuits) were about to embark on the First Known attempt to swim from Camden to Spike and back – a measured distance of 7k. 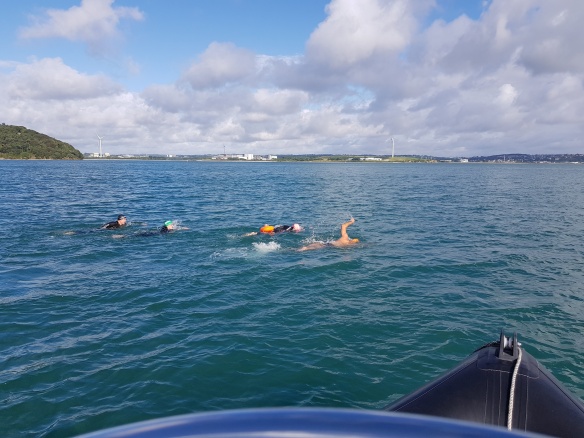 This is a challenging route, as there are several tidal streams to contend with – the Crosshaven tide, the set across the Curlane Bank, the main channel tide, the back of Spike and the Backchannel. Planning, and sticking to the plan, was key.  Harbour traffic of all sorts was also a feature – ribs, angling boats, yachts, powerboats, ferries large and small, not to mention local wildlife!

The breeze picked up to 15-20kts under a few clouds, creating a heavy chop at the corners of Spike. First feed stop was at the NE corner, in the shelter, where Sammy the Seal’s harbour cousin popped up to inspect these strange visitors.

Around the back of the island in very sheltered conditions, picking up some of the beginning of the ebb/wind driven current towards the pier. Ferries to and from the island were avoided, and another small stop was had west of the pier prior to the push for home.

The tide running out the back channel helped a little at this stage, but that also created wind over tide conditions which meant the swimmers were dropping off waves or going through them. The waves & falling tide also made sighting and course made good very challenging. The closer to Camden they got, however, it became more about the tide and less about the waves. The four swimmers crossed the mouth of the Owenabue in two batches between traffic, and fought the outgoing current to land on the pier at Camden, 2 hours 50 minutes and 8k covered distance after setting off.

The swim represented a new max distance for three of the swimmers (we all know Gary has been playing in that other place…). Ian Venner was pilot for the swim, and Jeannie McCarthy support crew.