Those who attended the prizegiving for the RNLI swim last Thursday night will have seen the presentation to Carol Cashell on behalf of Mr. Liam Maher. 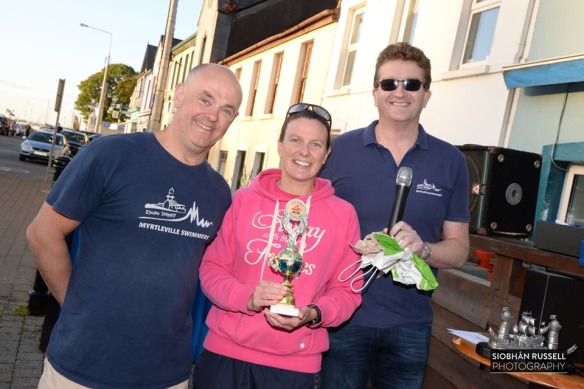 Carol subbing for Liam Maher at the presentation ceremony.

Some of you may recall that Liam has something of a history with the event.

This prize was awarded to Mr. Maher for his noteworthy performance last Thursday night at the finish of the swim.  There is always a very focused stage at the end when safety concerns dictate that all volunteers are closely engaged in monitoring the swimmers as they exit the water.  Liam chose this point to arrive, demanding to know “Where are all the bags?  Are all the bags here?  Who didn’t bring down my bag?  My bag isn’t here.”  You will note in all of this there was no mention of “I can’t find my bag”.  Oh no, it was all down to the organisers and I was the eejit who happened to turn around and catch his eye.  Bernard knew better – kept looking out to sea.  I’ll have to learn his zen-like powers of concentration.

Anyway, back to Liam’s bag – which I personally was responsible for losing, he left me know.  It wasn’t in the pile.  No way.  He was certain.  He’d checked.  Repeatedly.  Not there.  No.  I believed him.  Apparently it was the only Manhattan Marathon (boat assisted) Bag on the beach so if it was there, he’d see it.  Hence, it mustn’t be there.  Up and down the beach I searched.  All the way back up to the van.  Down again.  I was accosting people carrying bags of the same colour.  “Did you take Liam’s bag?  Didya?”  Things were getting bad.

I asked Bernard again.  Only the tenth time.  He fixed me with his steely, zen-like focus and said – “Damian, all the bags are there.  All of them”.  I stopped.  Drew breath.  Considered.  “Could Liam be a complete feckin’ eejit who can’t see his own bag?”  Hmm. I walked back to the pile of bags.  It wasn’t there.  However, it was less than five feet away from the pile.  Sitting on its own.  Happy.  Serene.  Waiting.  Five feet.  Five.  Maximum.  A good deal shorter than Mr. Maher himself.  Right there.

I knew then that the specially restored, vintage 1996 Kartworld Champion trophy we had been saving for a deserving recipient had found its home.  Here’s Carol passing on the trophy to Mr. Maher…… 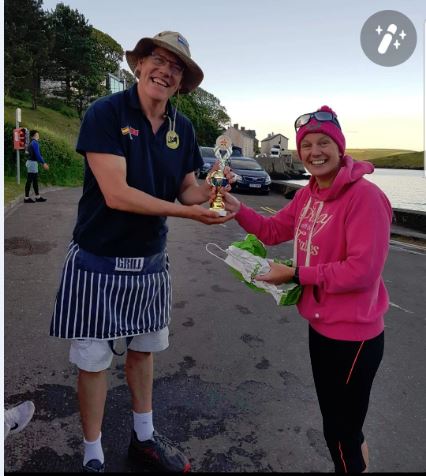 ….and said Mr. Maher out on the serious lash celebrating his win by demonstrating that if the bag had been twelve feet away, he could still have reached the bloody thing if he’d just feckin’ looked. 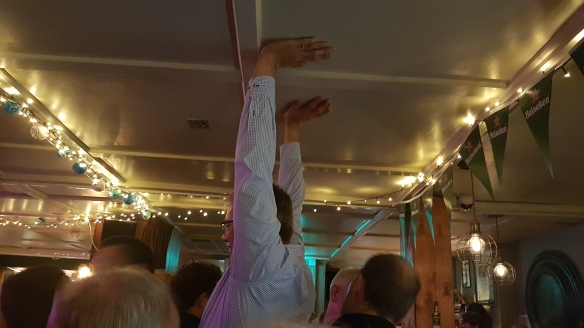 The trophy has now been officially named the Liam Maher Perpetual Trophy and will be presented to a deserving recipient, as yet unknown, at the next or future swims.  There’s bound to be a recipient.  Like the trophy says, there’s always one.